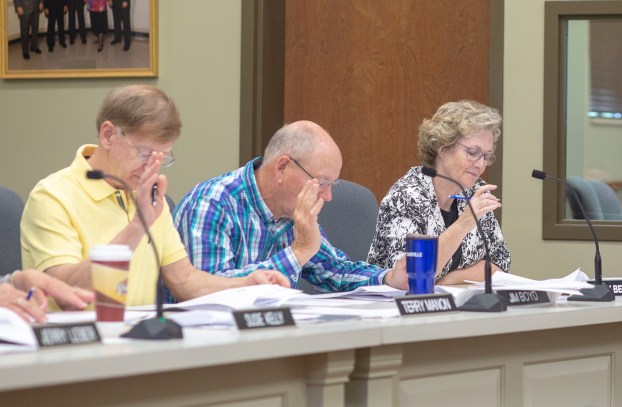 P&Z Commissioner Mary Beth Touchstone, right, votes during her last meeting as a commissioner in April. Photo by Ben Kleppinger.

The Danville-Boyle County Planning and Zoning Commission included a new face that’s familiar to many at its April meeting. And there could be another new face at its meeting this month. 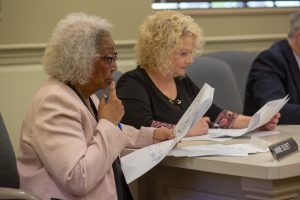 New P&Z Commissioner and former Perryville Mayor Anne Sleet looks over a subdivision plat during April’s commission meeting. Sleet is the newest member of the commission; next to her is another new member, Sonya Kitchen, who joined the commission in February. Photo by Ben Kleppinger.

“Thank you for agreeing to serve on Planning and Zoning,” Leber told Sleet. “You’ll get your feet wet real quick, I’m sure. … Thank you for taking that position and we’re glad to have you.”

Sleet served as mayor of Perryville for 12 years before choosing not to seek re-election last year. She was recently awarded a state “Unbridled Spirit for Justice Award” by the Kentucky Commission on Human Rights for having a positive influence on civil rights in the commonwealth.

The April P&Z meeting was also the last one for Commissioner Mary Beth Touchstone, who resigned effective yesterday. Touchstone was appointed to the commission by Boyle County in January 2018.

Boyle County Judge-Executive Howard Hunt said Touchstone was leaving because of a new job she took.

Touchstone, a former director of the Community Arts Center in Danville, was recently hired as an independent contractor for the Danville-Boyle County Economic Development Partnership, working on fundraising from corporate donors.

“I agree,” Hunt said. “After some discussions, it was definitely her choice.”

“We wanted to publicly say thank you. We appreciate your work and your help in being a member of Planning and Zoning,” Leber said. “We appreciate everything you’ve done.”

Hunt has asked members of the Boyle County Fiscal Court to offer nominations for people who could take Touchstone’s place.

Touchstone’s successor will be the third new member of the P&Z Commission to join this year. In addition to Sleet, Sonya Kitchen joined the commission as a representative for Junction City in February.

The next P&Z meeting is scheduled for 9 a.m. May 22 at Danville City Hall.

Photos by John Scarpa Hundreds showed up over the course of Sunday afternoon and evening to say goodbye to a... read more