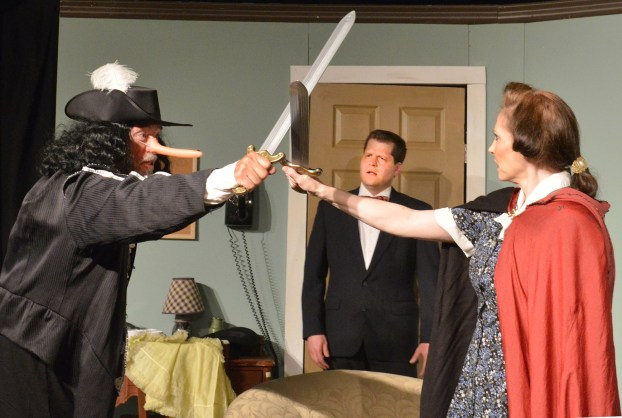 From left, Dale Kihlman, Conrad Wiles and Lori Shepherd rehearse a scene. Chaos seems to be the tone of “Moon Over Buffalo” which opens Thursday at West T. Hill Community Theatre. Photo by Robin Hart.

Darell Rickmers says all audience members need to know about “Moon Over Buffalo” is that it will appeal to “anyone who has a sense of humor.” The production he is directing hits West T. Hill Community Theatre’s stage for opening night on Thursday, May 9.

The play is a popular situation comedy by Ken Ludwig, which Rickmers explains was a great comeback success on Broadway for actor Carol Burnett.

“A classical acting husband and wife team are preparing to impress a critic, but his identity is mistaken and chaos ensues,” he says, and relationships go haywire in this “play within a play.” It’s centered around two fading stars of the 1950s. 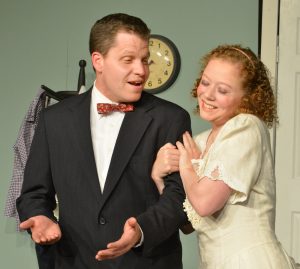 Rickmers says the two actors find out a movie-maker will be in the house for one of their shows, which leads to several misunderstandings and hilarity, including a drunk fiancé, a character tied up and shoved into a closet …

“It is really utter chaos, abounding,” Rickmers says. However, the auditions for “Moon Over Buffalo” were nothing of the sort; in fact, Rickmers says he had a hard time making some decisions.

“There were a few actors who stood out immediately as a character in the play,” he says, including a brand new actor to WTH — Conrad Wiles, cast as Howard. Fortunately, Rickmers says, he had four men audition and each one fit into his vision of the characters they portray: Dale Kihlman as George, Larry Kendrick as Paul Singer and Mike Crocetti as Richard.

Mary Carol Porter stood out in the role of Ethel, Rickmers says. “She has not disappointed, and has fully embraced this warm and wacky character.”

Rickmers says Hillary Zimmerman went out an a limb and attempted to read in a British accent as the script requires; “She blew me away and was cast in the role of Roz.”

Lyndsi Hersch has the perfect image of who Rickmers says he thought Eileen would be. “Not only that, her personality hit me as being how I see that character.”

He says one hilarious aspect of the auditions was having individuals read a portion of the script in their very best “drunken state.”

“There were great many interpretations, but the funniest was when Lori Shepherd read the role. She had the entire room in stitches,” he says, and was cast as Charlotte.

As far as who this production will appeal to, Rickmers says, “Anyone who has a sense of humor.”

“We have all been put into situations that eventually go horribly wrong because of misunderstandings. After this happens, and we stand back and look at all the events related to that situation, we can laugh at ourselves for how we dealt with the situation,” he says. “Regardless, we love to laugh at others who can’t see that the situation they are involved in is quite humorous. Everyone loves to sit back and laugh while watching other people’s misfortunes. That is what will appeal to our audiences.”

Rickmers says there are some adult situations and occasional swearing woven throughout the storyline. “However it enhances the story and accentuates the comical nature of our lives. The Motion Picture Association of America would rate this show’s humor as PG. Older children and youth would pick up on the clichés, innuendos and puns thrown about during the show.” 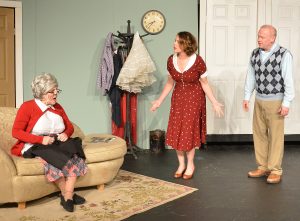 From left, Mary Carol Porter, Hillary Zimmerman and Larry Kendrick rehearse earlier this week at WTH for the opening of “Moon Over Buffalo.” Photo by Robin Hart.

Rickmers says he hopes audience members walk away feeling entertained and uplifted. “And I know they will. I know that no matter what problem or issues plague them, they will continue to talk about this show for days to come, hopefully even purchasing tickets to see it again …”

Rickmers says we all need to laugh because laughter is the best medicine.

“We all want to be entertained, even if for just a little while, and I think people will leave commenting that some part of the show is something they experienced at one time or another,” he says. “I know I have.”

The rest of the crew includes Steve Rinehart as state manager/assistant director; Kolton Winfield, lights and sound; and Kihlman, Rinehart, Winfield and Brandon Long as set design, construction and dressing.

Kentucky writers celebration kicks off May 18

Although the Kentucky Writers Day Celebration took on a new name last year, it has continued on annually since 1996.... read more