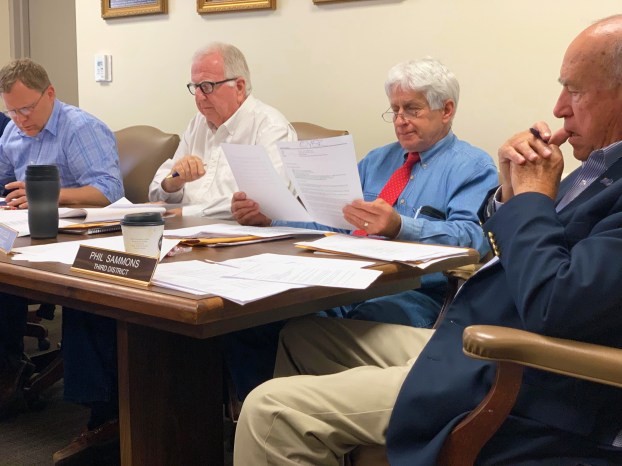 Magistrate Tom Ellis, second from right, reads over language change recommendations he made for the Economic Development Partnership's memorandum of agreement. ( Photo by Bobbie Curd)

Boyle County Fiscal Court is still toiling over the Economic Development Partnership memorandum of agreement, but this time around magistrates got some firm words from the county attorney.

Judge-Executive Howard Hunt said, “I know there have been some email exchanges and language changes lately (to the MOA) … I just want everybody to keep in mind we need to move forward. And so, Tom?”

Magistrate Tom Ellis, who spearheaded proposed changes to the MOA, is known as an outspoken critic of the EDP. “I’m pleased to say that after I sent this language … both the CEO and chairman of the EDP both sent me favorable comments,” he said.

Ellis again brought up the Diageo distillery project that Danville lost out on to Lebanon; he feels that unneeded secrecy was involved in negotiations, and that more local officials should be included in those talks.

He said the business prospect “might have gone differently if we had the 17 individuals from across the spectrum of our economic, our intellect of the community. The leaders of the community, had they understood that they had that right …”

He said, “I’m happy the EDP agreed to add ‘through coordination and direct communication with our partners,’ and that’s the agreement that we’re signing … So I recommend that with the favorable responses we got from the EDP, I recommend we make those changes to the document.”

“I second that,” Magistrate Jamey Gay said. “And to authorize the judge to sign it.”

“I’ve got a comment. It’s my duty to review contracts, agreements and so forth. And you’ve got a lot of knowledge,” County Attorney Chris Herron said to Ellis. “And I appreciate that. But why wasn’t I in the mix of this?”

Ellis did not respond.

Herron said, “That kind of disappoints me. Not that I wouldn’t go along with it, but …”

Magistrate Jason Cullen interjected, “So, the EDP did not send you any …”

“I’ve looked at this agreement previously, but nobody said there was a problem with language or so forth,” Herron said. “But if there is, I’ve got an open door policy. Please come to me, because that’s my job.”

Cullen said he definitely wanted Herron’s review of the document, and said he had more questions about some of the wording. He said parts of the document “binds our hands that we have to move all business through the partnership and immediately refer information to them …” He said he has problems with another section that seems to indicate “we can’t do anything independent … each partner agrees to fully comply ….”

Cullen apologized the court didn’t talk more to Herron about the MOA, “but this needs to go through another level of scrutiny. So I’m actually going to say let’s have our county attorney with all his knowledge look at this and help us make sure we’re not getting into something that we shouldn’t be in.”

“I agree with Jason and will not support the motion,” Magistrate John Caywood said. “… But what I will support is that (Herron) reads it first and then reports back to us and then we will take it under advisement.”

Ellis said he was happy to withdrawal his motion “with the idea that the entire document gets scrutiny by our county attorney.” He said his concern is that “input and participation and accountability need to be minimally at the hands of the EDP board, and really prefer it goes further.” He said if an individual of the community “would bring us something, he or she would have an opportunity for continued input.”

“I withdraw my second … Sorry, Mr. Herron, didn’t realize you weren’t involved in this,” Gay said. Magistrate Phil Sammons expressed the same, and added, “You should have been.”

“If there’s a problem with language, I think I’m the one who should be talking to Jody Lassiter (president and CEO of the EDP),” Herron said.

Cullen said, “The EDP has been very good about making changes and taking into consideration the issues we have, but I think it needs a stronger stricter eye.”

All magistrates agreed to send any concerns over language in the MOA to Herron as soon as possible, and be ready to act on the MOA by the next regularly scheduled meeting.

Gay reminded magistrates again that the fiscal court is part of the partnership. “And through this and the city’s involvement, the public — through us — always has input in this process. It is a public entity.”

Delays in approving a new “memorandum of agreement” appear to be testing the bonds between some partners in the Danville-Boyle... read more