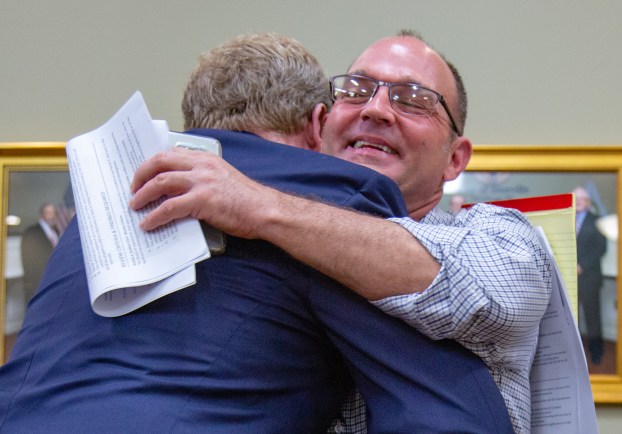 A transitional living home project that aims to help newly released inmates successful re-enter society got the go-ahead from the Danville-Boyle County Board of Adjustments Thursday morning.

The board voted 5-0 to grant Seeing Hearts Transition Home Inc. a conditional-use permit so it could operate a group-living facility on a piece of property owned by the Boyle County Industrial Foundation on Lebanon Road.

“I can’t wait to go spread the news right now and to reach out to everyone that’s been waiting in the wings and let them know it’s time to get to work,” said Seeing Hearts founder Andrew Wilkinson, shortly after the Board of Adjustments adjourned. 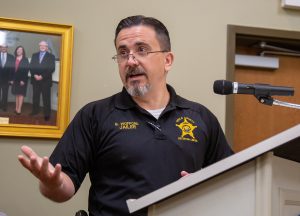 Boyle County Jailer Brian Wofford testifies during a public hearing that he believes a transitional home for recently released inmates would benefit the neighborhood. (Photo by Ben Kleppinger)

Wilkinson said he has a list three pages long of volunteers willing to get the property in shape now that he’s cleared one of the major hurdles for the project.

“The next step is to attack the property, if you will, getting it into the cleanup phase and the organizational phase — knock back the brush and start immediately on the cleanup effort,” Wilkinson said.

The prep work at the former farm home, including running sewer to the buildings that are currently served by septic, will cost an estimated $15,000-$17,500. The work should take 60 to 90 days, and the transitional home could be ready for its first clients by late summer or early fall, Wilkinson told the board. He anticipated it will cost around $70,000 annually to operate the facility, which could house up to eight former inmates of the Boyle County Detention Center at a time.

“I don’t think we’re here today to discuss the need for an organization like ours in the community. I think everyone understands the need,” Wilkinson told board members during the public hearing.

Seeing Hearts plans to work with staff at the local jail, including Boyle County Jailer Brian Wofford, to identify inmates who will soon be released and are already demonstrating a desire to change and lead a better life, Wilkinson said.

“Just because someone is being released from jail doesn’t mean they’re a proper fit for our home,” said Wilkinson, explaining the home would not accept inmates convicted of murder, manslaughter, arson or sexual crimes. “… We are intentionally and prayerfully seeking out men we believe can benefit from our program. We are looking for men that have illustrated accountability for their crimes. They know what they did was wrong and they’re trying to change their lives.”

Seeing Hearts will offer counseling and assistance finding employment for its clients, who will live together in one of two main buildings on the 10-acre property. Random drug and alcohol tests will be a requirement, and the property will be under surveillance 24/7. A shuttle will be available to transport clients to and from work, and there will be parking available for at least 12 vehicles on the property, making it possible for those with cars to use them. But the clients will be prohibited from leaving the property on foot.

“We are basically looking for middle-of-the-road men that know what they did was wrong, they’ve gotten off-track in life … they need help. They need guidance. They need structure. They need accountability in their lives going forward to put those pieces back together,” Wilkinson said. “And they certainly can become taxpaying productive members of our society and Seeing Hearts is going to help them become this.”

P&Z Director Steve Hunter said Seeing Hearts must still obtain two change-of-use permits, which will require building inspections and potentially substantial improvements to the buildings, which were originally intended for single-family use and now would need to meet code for group-living use. 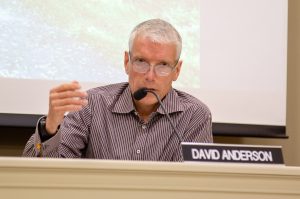 Industrial Foundation attorney Matthew Walter told the board Seeing Hearts sought input from neighbors at a community meeting before pursuing a conditional-use permit. “Hopefully some fears were alleviated,” he said, because neighbors have been involved in the discussion.

Wilkinson first attempted to open a transitional home in a residential Danville neighborhood last year — a plan the Board of Adjustments rejected after numerous objections from neighbors, Walter acknowledged. Wilkinson was told essentially his idea was good, but he needed a different location. Walter said during the 10 months since that decision, Wilkinson has made contacts among people who run transitional homes in other areas and learned a lot more about how to do it right.

“I think Andrew would admit that last go-around, he wasn’t ready to do this 100-percent,” Walter said. “He was in thought and spirit, but maybe didn’t have all the pieces together. But he does now.”

One neighbor expressed mild concern about the type of people who would be living on the property, but noted he and his wife are “cautiously supportive.” Jailer Wofford was one of several community members to speak in favor at the hearing.

“The men that are coming out of the jail, they’re Boyle County residents,” he said. “They’re already coming out into our community. So they’re coming out basically adrift … What Andrew is providing them is an opportunity for change, some structure in their life.”

Wofford said there are currently some problems with “squatters” and people using the property inappropriately. Once Seeing Hearts fixes up the property, staffs it with a residential advisor and brings in men who are working to improve their lives, “it will actually lower any kind of instance of that.” 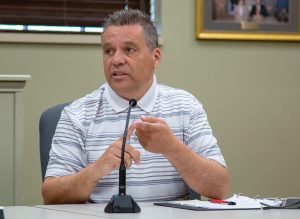 P&Z Director Steve Hunter talks about the change-of-use permits Seeing Hearts Inc. must still acquire before it can begin operating a group-living facility on Lebanon Road. (Photo by Ben Kleppinger)

Partin said helping people emerging from jail is vitally important in the first 90 days because that’s when the most doors are closed to them and they’re most likely to reoffend. Transitional living facilities help bridge that gap and lead former inmates to productive and happy lives, she said.

“We’ve been doing that since 1994 and it works,” she said. “… There’s real potential for sustainability here. It will transform your community.”