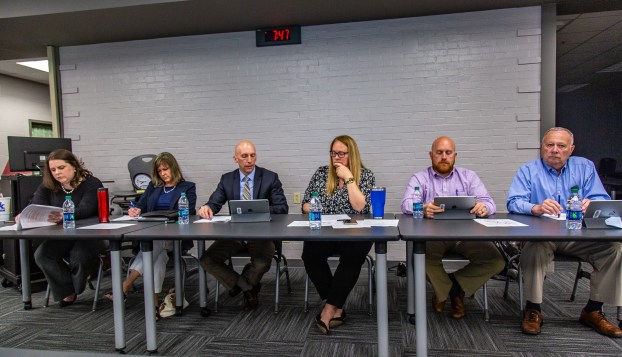 The Boyle County Board of Education meets Thursday night. (Photo by Ben Kleppinger)

Boyle County Middle School can keep its agriculture class next school year. The Boyle County Board of Education voted Thursday night to allocate an extra teacher position to the middle school beyond what its current student population of 600 would normally provide. 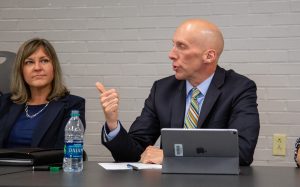 “I’ve had overwhelming support for this position at the middle school,” board member Jesse Johnson said. “Local community members of all facets of the community have gotten back to me with very strong recommendations for this. I think our community spoke and kind of let us know what they think is best for our school.”

Boyle Middle would have been getting 27 teacher positions for next school year through its Section 6 funding from the district, based on its current student population. But it would need to gain only five new students over the summer in order to qualify for a 28th position.

At a working session last week, Boyle Middle Principal Steve Karsner showed the board that the school has gained an average of 19 students a year over the last five years, meaning it’s likely the school would get the extra position anyway. But hiring the position is much easier now than in August, he explained.

Adding the teacher position back will cost the district an estimated $50,000 it wouldn’t have spent if Boyle Middle doesn’t see an increase in its student population.

Superintendent Mike LaFavers showed the board data on how close every school in the district is to gaining another teacher allocation next year — only Perryville Elementary was close like Boyle Middle, needing just five additional students.

But, LaFavers noted, growth at Boyle Middle has been regular in recent years, while Perryville has remained flat or even lost students on the whole.

Johnson made the motion to give Boyle Middle the extra allocation; board member Laura Guerrant seconded and it passed unanimously.

In other business, the school board heard from architect Tony Thomas that work being done on the new Boyle Middle building continues to be of high quality, but the pace isn’t fast enough.

“Christmas is very doable in my eyes, but not at the rate they’re moving right now, and not with the number of people they have on site,” Thomas said. 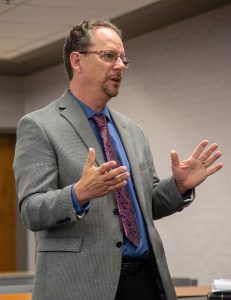 He told the board he plans to meet with higher-ups from the contractor and subcontractors and push them to get things done more quickly. “We’re going to start drawing the line because the speed needs to increase.”

• gave final approval to purchase most of the furniture for the new middle school currently under construction from KDA Office Furniture at a cost of $524,605.35; and

• gave final approval for a Section 7 funding plan that will take responsibility for buying student Chromebooks off of principals and change the lifecycle for each Chromebook from three to four years. Students will get their first Chromebooks in fifth grade, and a new Chromebook again in ninth grade.

“They will have to learn how to take care of their devices,” LaFavers said of students.

Chief Information Officer Susan Taylor said, “It creates a nice flow for having a new device at regular intervals and it relieves the pressure from the principals.”

Economic developer to Danville-Boyle: Tell a good story, have a good strategy