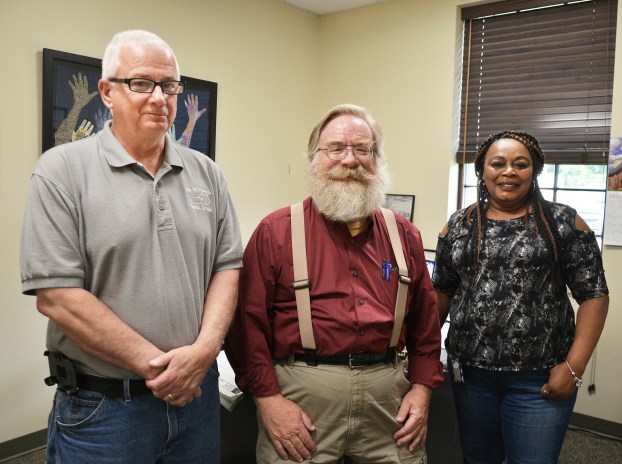 Danville City Engineer John Cassel deals with issues from how to stabilize an old sinkhole in someone’s backyard to keeping the downtown streetscape project on schedule despite unexpected problems. He oversees the city’s street paving and sidewalk projects, the construction of new walking and bike trails, and comes up with plans to fix street drainage problems.

But he doesn’t take all the credit. “It’s a team thing,” Cassel said as he was driving around town, checking on projects and resident complaints. 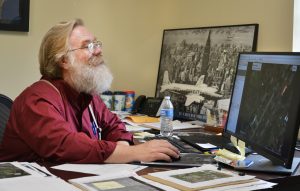 John Cassel researches every resident’s call about drainage and other issues that the city is responsible for on Google Earth. He then prints out the photo and keeps a file of every concern he’s working on. (Photo by Robin Hart)

Cassel relies on his administrative assistant Joyce Collins, and Rick Henry, director of public works, to help him keep up with everything that his position demands.

He’s also appreciative of all the people working in public works. “They do tons of things, (from) picking up trash and dead animals to pouring concrete sidewalks” and planting trees and flowers around town.

One of his upcoming projects he hopes to complete is the renovation of the expansive public works garage on Second Street. He said plans have been held for several years because Earl Coffey, the previous city engineer who is now municipal utilities engineer, never had time to get the project underway.

Every day, Cassel has a to-do list that he prioritizes. And every day, “something comes up that would be distracting me.” For example, the delivery of two enormous concrete beams that were to be installed on the Second Street pedestrian bridge arrived about an hour and a half later than he expected, so he rearranged his schedule.

Cassel has been at the Second Street bridge site often, in case questions arise. Clarks Run is a pretty creek, he said, and he’s enjoyed watching the wildlife and how people are trying “to keep the place beautiful.”

But the day after Christmas, when the creek was swollen, Cassel said he saw an entire drum set floating down the creek.

Cassel often takes calls from residents who want the city’s help with drainage issues or want their street widened. “We take everybody seriously,” Cassel said. He goes to the site, takes photos and keeps a file of what he found. 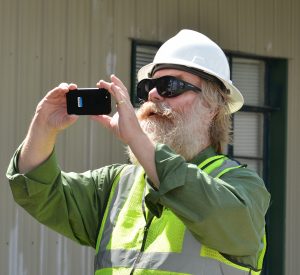 Sometimes an issue needs to be taken care of immediately due to safety issues. But sometimes, he can’t do what the homeowner requests. For example, one resident wanted a new, longer drainage pipe installed, but his plans would cause his neighbor’s front yard to flood. “We can only help to a certain point … We have to consider all these things.”

Cassel said, “Sometimes I’m called out about something by somebody that’s complaining about some little thing. And other people nearby are dealing with complicated, worse issues and they’re just sweet about it.”

Cassel graduated from the University of Kentucky with a degree in civil engineering and specialized in hydraulic and structural analysis. He worked at the Bluegrass Airport as a civil engineer for many years, and was a member of the Kentucky Air National Guard.

In 2003, he said his unit was “tagged” when the Iraq War started. They were responsible for maintaining and operating the airfield.

“We were also tagged to support the special ops guys. … We were supporting them with carpentry guys, utility guys, electrical guys, power production guys …” Cassel said.

One night, the special ops unexpectedly shut down and Cassel, who was the deputy commander of the engineering squad, had to convince a commanding officer to let his men  inside the area so they could safely and properly shut down the power.

The next day, “all of a sudden the entire base is called up on a higher alert. We were told to get our helmets, kevlar protection, get everything you need in case we might get shelled.“

Cassel said he was doing laundry the following day “with kevlar and the whole business on when they finally announced over the news that they had captured Sadam Husein and that he was being held at a special location at the Baghdad International Airport. And then I put two and two together. They had him right there where I was standing 80 or 100 feet away from him when they had brought him in.”

Cassel said his unit was there for about five months, “then we went back to normal, back to our civilian jobs …” He has since retired from the Air National Guard as a lieutenant colonel. 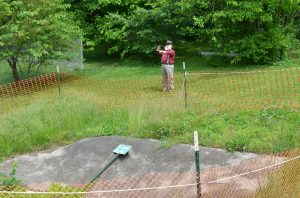 City Engiineer John Cassel photographs an old sink hole that has begun opening back up in a backyarrd in Danville. Many years ago the city appeared to have tried to remedy the problem, but now it’s his problem to figure out. (Photo by Robin Hart)

Working in Danville for the past few months, Cassel said he is “incredibly impressed with the organization with the city hall here. … They’re a great bunch of people. Everybody is conscientious about working hard and working with each other …”

The first project Cassel was in charge of in Danville was the concrete drive behind the fire station on the bypass. “… It impressed me with all the different people I had to deal with — local people, material suppliers, guys in public works, firemen — everybody coordinated and worked together.”