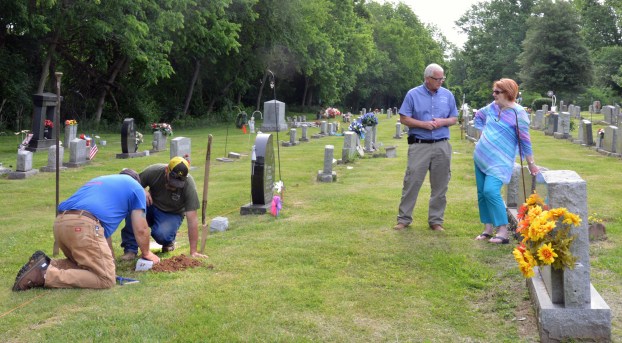 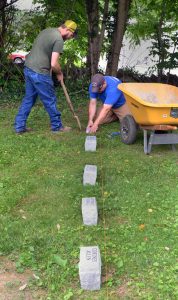 In Bellevue and Hilldale cemeteries the pauper burials have gone unnoticed and largely forgotten until now. Eighteen of these graves were located and marked with granite stones engraved with the decedents’ names and death dates, and were paid for by the Danville Cemetery Fund.

As cemetery workers carefully set the stones Thursday morning in Hilldale Cemetery, Public Works Director Rick Henry said he brought up the subject during a staff meeting.” I felt like people who didn’t have a marker needed one.”

Henry said the pauper graves had nothing to acknowledge that the person had ever lived in Danville.

Cemetery Committee chair Gail Louis said, “They were human beings. We thought it was the right thing to do.” Now, family members will know where their loved ones are buried. They won’t have to visit just a general area, Louis said.

The Cemetery Committee has a small annual budget, funded by the city commission, that’s mostly used for the cemetery workers’ salaries, Louis said. The rest of the money is used to pave old lanes throughout Bellevue and take down dead and dying trees in both cemeteries. When funds are available, the committee plants replacement trees, Louis said.

Being able to pay for the small markers (which are actually foot stones) was something the committee could afford because “Boyle Monument Company gave us a good price,” Henry said.

Nine pauper markers were set in both Bellevue and Hilldale cemeteries, Henry said. He expects more pauper burial locations may still be identified. “Some we don’t have records for. As we find names and locations, we can add more stones as we go.”

Because the cemetery fund is extremely limited, Louis said a Friends of the Cemetery Fund was established about four years ago. It’s separate from the city budget and is strictly used for the beautification and betterment of our cemeteries, Louis said. However, it’s not widely known. With only about $700 in this account there aren’t many extra things the committee can do, Louis said.

She’d like to plant more replacement trees and put in flower beds. And “there are some old, old stones that need to be put back together. Jason (Turner) is very good at patching them up, but sometimes patching isn’t good enough,” Louis said.

Turner, who is cemetery supervisor, said a lot of the old trees in the cemeteries are damaged or dying. He prefers to take down the trees himself, but sometimes they have to hire a company to do the job. When the cemetery committee has to pay for the service, then they don’t have enough money to plant replacement trees. Turner said if it takes $3,000 to take out a large old tree, the Friends of the Cemetery fund could be used to purchase a new tree.

Louis said the Friends fund could also be used to continue adding the modest headstones to unmarked graves.