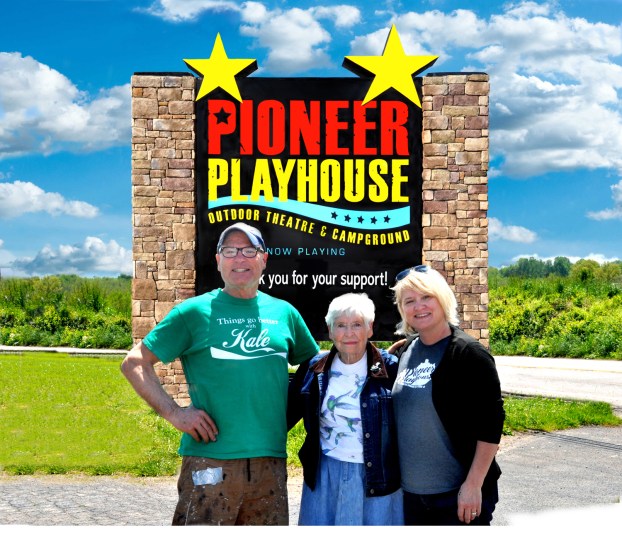 It all began with one man’s dream of bringing Broadway to the Bluegrass, and the rest is history — 70 years of history. Founded in 1950 by Col. Eben C. Henson, Pioneer Playhouse of Danville is Kentucky’s oldest outdoor theatre, but it is also one of the oldest continuously operated summer stock theatres in the United States. 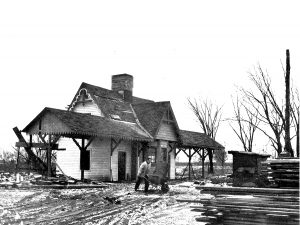 Even though Eben did receive help along the way, he grabbed the reins and worked as the task master for 54 years to keep the Playhouse alive; often performing the manual labor himself. (Photo contributed)

“When my dad started out in the ‘50s, there was this movement across the country to develop summer stock theatres in places outside New York, Chicago, Boston, LA,” says Heather Henson, daughter of founder Eben and now managing director of Pioneer Playhouse. “It was seen as a chance for actors to get some fresh air, get some acting experience, and bring ‘big city’ theatre to small towns.”

“If you’ve seen the old movie ‘Summerstock’ … ” Henson continues, referring to the 1950 classic starring Judy Garland as the country girl whose family farm is overrun by a New York City acting troupe led by Gene Kelly.  “ … You get a sense of the kind of crazy energy it took to do theatre on a shoestring budget in the middle of nowhere.”

Eben Charles Henson was born in Danville in 1923. He grew up on Main Street in the Henson Hotel, which was run mainly by his mother, Brooklyn native, Celia Bloch Henson, while her husband, Federal Revenue Agent, Eben Burdett Henson, chased bootleggers through the Kentucky hills.

“Dad’s dad was also a magician in his spare time, so maybe that was the spark, we’re not sure,” says Henson. “But for whatever reason, Dad became interested in performing at an early age.”

After serving in World War II, Henson went to seek his fame and fortune in New York City. He studied theatre on the GI Bill at the respected New School, rubbed shoulders with Tony Curtis and Harry Belafonte, and even got to appear on Broadway in a small role. But when his father became ill, Eben Henson returned to his hometown and decided to bring his big dreams with him.

“Dad knew there was an actual theatre inside what was then the old Darnell Hospital, which had housed POW’s during the war, and now was the state mental institution,” says Robby Henson, son of Eben and artistic director of Pioneer Playhouse. “Dad was able to get the space for free. In fact, that’s what Dad became known for – getting things for free or for very little.” 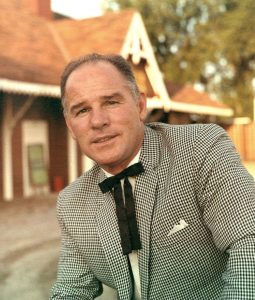 “We call him the original recycler,” says Heather Henson. “Dad would go to a construction site and ask if he could take the bricks or boards or beams they were tearing down, and usually the answer was yes.”

“Our box office was the original train station in the MGM classic, ‘Raintree County,’ starring Elizabeth Taylor and Montgomery Clift,” says Robby Henson. “MGM had built it in Danville and was just going to scrap it when they left, but Dad said, ‘Hey, I’ll take that,’ and it became the main landmark that today’s Pioneer Playhouse was built around.”

“We grew up at the Playhouse,” says Heather. “So it’s in our blood, in our bones. We’ve just always pulled together to keep it going.”

Col. Eben C. Henson died in 2004, leaving his wife, Charlotte, and daughter, Holly Henson to run things. When Holly succumbed to breast cancer in 2012, Robby, who had been directing plays during the Playhouse summer seasons since college, and Heather, who had recently returned to Kentucky, stepped into the breach.

“Mom is the backbone, and the three of us truly work together to keep Dad’s dream alive,” says Heather Henson. “But I think it’s more than that at this point.”

“We’re proud of what we do here,” says Robby Henson. “Putting on a play has so many moving parts, it really takes a titanic effort of crew, actors, and directors working together. And then we perform that play for two weeks under the stars, and then it’s gone. Theatre is ephemeral magic.”

Pioneer Playhouse opens for its 70th season on June 7 with “Kong’s Night Out,” which will be up through June 22. The playhouse presents shows nightly, Tuesday-Saturday through Aug. 17. There will be a final stand-up comedy weekend on Aug. 23 and 24. Dinner is available each night at 7:30 p.m, and the show begins at 8:30 pm.

Pioneer Playhouse is located at 840 Stanford Road. For a full listing of plays and information about tickets, go to www.pioneerplayhouse.com or call (859) 236-2747.

In 1969, 15-year old John Travolta came to Pioneer Playhouse as an intern. In his first stage appearance, he played a medical peer of McDowell in The Ephraim McDowell Story by Eben Henson. This is his audition sheet. (Photo contributed)

Audiences flock to the Playhouse for ten weeks each summer where a new show is produced every two weeks. (Photo contributed)

Harvey Lee Yeary enrolled as an intern for the 1962 summer at Pioneer Playhouse, after which he headed for Hollywood, changed his name to Lee Majors and became a star. Picture here in front of the box office with his first wife, Kathy in his very first publicity photo.(Photo contributed)
You Might Like

Thursday afternoon, local authorities reported to the scene of two fatal incidents on Boyle County roadways, back to back. First,... read more