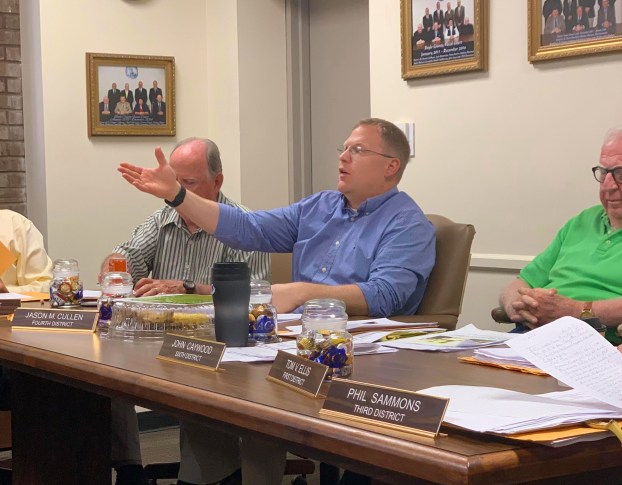 Magistrate Jason Cullen discusses the budget during Friday's Boyle County Fiscal Court meeting. The second reading of the 2019-2020 budget will be held at the end of June. (Photo by Bobbie Curd)

Boyle County Fiscal Court held the first reading of its 2019-20 budget Friday. County Treasurer Mary Conley passed out a list of “considerations derived from budget workshops,” highlighting any changes that were made since the budgeting process began.

Conley had some strong words of warning for the court, especially after being cut-off by a premature motion to approve the first reading while she was attempting to explain the changes and why they are important to take notice of.

Conely said the court is “eating into your surplus at a rate I think we should protect, going forward.”

Almost all of the changes made during budget planning have a negative effect on the general fund’s bottom line, but Conley was able to share the good news — an added $28,449 from a workers compensation dividend payment from the Kentucky Association of Counties.

“Fiscal court made all of those approvals with appropriations,” Conley said, referring to funding given to community agencies and organizations. Of changes the fiscal court agreed on in budget workshops, “the net effect was $59,626, almost $60,000 in your overall budget,” she said.

That included the decision to bump Main Street Perryville’s funding up to $44,215, from $39,215, to pay for Director Vicki Goode’s raise.

Many agencies were given the same amounts, but there were a few changes. The Economic Development Partnership requested $150,000, but the court agreed on $70,000 — the same amount it’s providing this year — with $30,000 in reserve. A few others were given decreased amounts, such as nonprofit organizations Helping Hands (awarded $5,000) and Happy Feet ($1,000).

And the court declined to fund three new requests from Community Action Partnership, Pioneer Playhouse and Heart of Danville.

Although Danville-Boyle County Parks and Recreation received less overall funding from the county, its main budget request of $253,225 was approved — an increase over the $200,000 it received this year.

• the Danville-Boyle County Planning and Zoning Commission appropriation went from $65,000 to $75,000; and

• the Veterans Day appreciation lunch annual event appropriation was increased to $1,000 from $600.

Other changes included taking a part-time employee at the recycling center to full-time, adding another $31,620 to be carved out of the general fund, as well as $15,000 for convenience center upgrades at Alum Springs and Forkland. An upgrade to the phone system’s hardware at the courthouse will cost $45,000 — more coming out of the general fund.

As Conley got to the detail on the Public Works budget changes, she noted a positive effect when she and City Engineer Duane Campbell decided to push some bridge work to be paid by an 80/20 grant into the following year’s budget. Campbell, who was not present at Friday’s meeting, will not be able to get to the project in the upcoming new budget year, she said.

Conley noted the county will also take a $10,000 hit for road salt it didn’t this year.

“We need to consume what we currently approved … Otherwise, we will be talking about a tax increase,” Conley said. “And I’m just going to say that out loud.”

She said the court needs to take some time this summer to look at salaries.

“Look at where we’re going, and spend some time and analysis on forecasting your funds forward as to see where we’re going to be in the next five years and what it will take for us,” she said. “… All of this conversation makes me really nervous.”

Check back Tuesday for more on Boyle County Fiscal Court’s budget discussion, including an in-depth discussion about handling wage discrepancies across the county.

Firefighters eager to move across Main: Tour of crumbling station shows why a new one is so badly needed

Without room for growth, or even enough room for all of their trucks to be parked inside of the bay,... read more