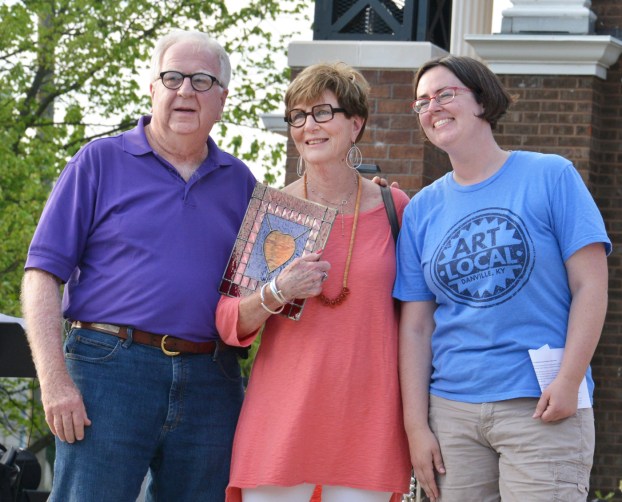 John and Martha Caywood smile for the camera with Kate Snyder who had just presented them and their business The Derby Shoppe with one of the two Creativity and Innovation Awards. Elmwood Inn Teas received the second award. (Photo by Robin Hart) 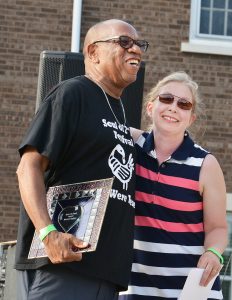 Michael Hughes smiles with Sara Lamb after she presented him with the Heart and Soul Award from the Heart of Danville. Photo by Robin Hart)

The five downtown businesses, property owners and volunteers were recognized as going “above and beyond to contribute to the revitalization of the downtown district,” said HOD Interim Executive Director Dustin Duval.

The Heart and Soul award was presented to Michael Hughes by Sara Lamb. This award goes to the person or business who puts their “heart and soul” into preserving the downtown area, Lamb said.

The King of Heart was given to Tim Montgomery. HOD chair Logan Germann said Montgomery has “taken action and invested his own time, talent and capital into the renovation and restoration of two downtown projects this past year.

There were two Heart on Fire awards given this year to the businesses who “demonstrated a willingness to embrace creativity, innovation and all around awesomeness by offering up their walls as a service for public art,” said Kate Snyder, referring to the public murals that were created in 2018.

Martha and John Caywood, owners of Raggs and The Derby Shoppe allowed the HOD to commission Andee Rudloff to create a color mural on the side of their building on Third Street.

Another Heart on Fire award was presented to Bruce and Shelli Richardson, owners of Elmwood Inn Fine Teas on Second Street who allowed the mural “Diversitea” to be installed on the side of their building. The artist, Dee Craig was commissioned by the Sister Cities Commission.

The Big Heart Award was given to Jimmy and Denise Wade, parents of the former Heart of Danville executive director Nick Wade. This award is given to the person (or people) who “puts in the most hours promoting downtown” and volunteers for all of the Heart’s events including the Main Street Live summer concert series, the holiday ice skating rink, Harvest Fest and Lawnchair theater.

At right, Heart of Danville Interim Executive Director Dustin Duvall congratulates Bruce and Shelli Richardson, owners of Elmwood Inn Teas for receiving one of the two Creativity and dInnovation Awards Thursday night. The second award was given to The Derby Shoppe. Photo by Robin Hart)