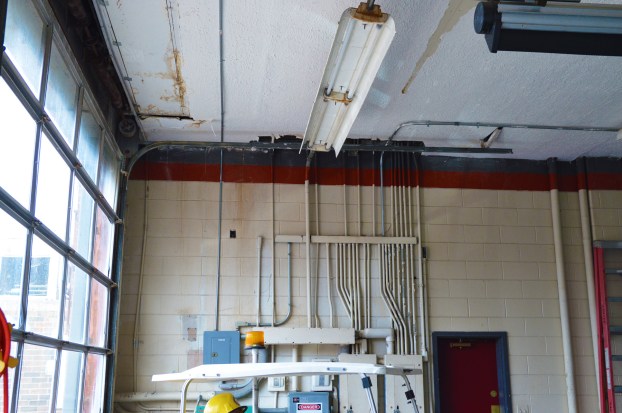 Water damage is readily seen at the entrance to central fire station, through the bay off of Main Street. (Photo by Bobbie Curd)

Firefighters eager to move across Main: Tour of crumbling station shows why a new one is so badly needed

Without room for growth, or even enough room for all of their trucks to be parked inside of the bay, the Danville Fire Department is busting at the seams — literally.

Chief Ken Pflug points to a spot in the outside brick wall where it’s separating from the window, creating large gaps in the foundation. Parts of the brick are cracking in other places.

Now that the city has its renderings and floor plans for a new central fire station, with construction planned to begin in August, Pflug says the department is eagerly looking forward to the move. And one look around the existing station explains why. 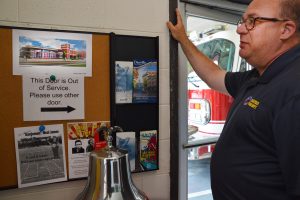 “The wall was actually moving,” Pflug says, explaining why they affixed a steel bar to it as a brace. That’s what an engineering firm recommended they do to support areas of the central fire station temporarily, in order to hold the wall to the floor system.

The building was constructed in the mid 1960s to house police, fire and dispatch. Pflug says when the city built fire station #2 out on the bypass, it “moved dispatch out on the hill,” in the old 911 center off of Hustonville Road. Then, police moved out of central station and across the street into city hall when it was finished in 2010. Local 911 dispatchers now operate out of city hall’s secured basement.

“Stair-stepping cracks aren’t unusual, but when you have these through-cracks … they’re a problem,” Pflug says, referring to the wall inside of the bay. He points to the other side, where there are large stains on the ceiling and walls.

They have a lot of water issues here, he says. And when the city paid for an independent study to be done, “the report said the station is at maximum capacity for electrical services. So, no room for growth,” which can affect attracting new candidates or keeping the firefighters they have.

Pflug backs up in front of one of the engines. “Can’t go past this,” he says, using his foot to point to a bright yellow line painted on the concrete. “We’re over top of the old shooting range in the basement.”

The cracks are beginning to go straight through in areas, causing the floor to droop when it gets wet. So trucks can’t go past the yellow line for fear of them falling through to the basement.

“It would be fiscally irresponsible to put any more money into this building. And being landlocked … it just didn’t work,” Pflug says.

He walks down the stairs to the basement area, which over the years has served different purposes. Dispatch and then police detectives were housed there, but now it’s set up for storage. “The fire department came in and cleaned it all up, mitigating the mold. It was very wet,” Pflug says. 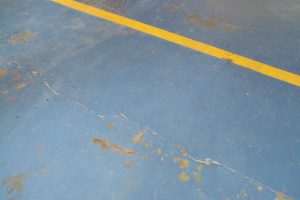 A yellow line was painted on the bay floor of central fire station, Chief Ken Pflug says, in order to show crews where to stop firetrucks. Just beyond the line is a huge crack in the concrete floor, which is overtop of where the old shooting range used to be. “We don’t park trucks beyond that line any longer because we’re afraid they’re going to fall through,” Pflug says. (Photo by Bobbie Curd)

He walks into the old shooting range room, and points up to the ceiling where several cracks are seen with water damage stains. “That’s why we don’t let any trucks back over it.”

Pflug and others have been going through old storage areas, getting a lot together to declare as surplus, in preparation for the big move. “Looks like it will be about 18 months after (construction) starting in August, so we should be in sometime in early ‘21,” he says.

A firefighter for 31 years, Pflug sat down with architects on the new station project, as well as his battalion chiefs. “We discussed it all, and I gave them all of the programming we’re doing now and what we might be doing in the future …” so, hopefully, the floor plans will take the department into the next several decades.

Back at the station, Pflug walks up the wide set of stairs inside the lobby, which are not ADA-compliant. “Stairs now can’t go higher than 12 feet without a landing,” and says the station was also designed as a fall-out shelter.

After the fire department took over the building, Pflug said crews did a lot of work to it, including turning five back offices into dorms. Danville FD works on a three-platoon system, each one rotating through a 24-hour shift on-duty and 48-hour off-duty schedule.

Pflug says there are generally seven full-time fighters on shift, plus possibly some part-timers.

The new station will have 10 dorms, each with three beds — one for each shift.

He opens a room, packed full of gear and tanks. “It’s our SCBA (self-contained breathing apparatus) air packs. We’ll have a room for them in our new station. Right now, we’re using the furnace room for it,” Pflug says, with EMS supplies stored next to them.

In early 2015, the department “enhanced our response to include more EMS runs,” Pflug says. All firefighters are required to be EMTs — they must earn the certification within their first year of employment.

On certain types of runs, firefighters usually beat paramedics to the scene. “It’s the criteria of what kind of calls they are, not where they come from,” he says. They handle situations like difficulty in breathing, or chest pains — the life threatening ones. Firefighters don’t transport patients in cases like this; they treat them at the scene until paramedics get there.

‘It gets really crowded’

The “old smoking room” upstairs was turned into a fitness room by the department. “This is makeshift,” Pflug says, pointing out various machines piecemealed together. “But, we can look out the window and watch the new station being built.” 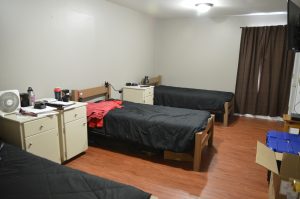 Pflug says he will be happy when the old buildings — Dexter Real Estate-Insurance and Off Broadway Terrace apartments — are finally demolished. The city paid roughly $1.5 million for the two parcels of property to the left of city hall.

Pflug walks into the kitchen and living area of the station, pointing to an extended part of the wall behind the kitchen cabinets. “We built this to cover up a big beam we put in to hold the wall in place. Behind that build-out, there’s a gap all the way down where the wall is separating. I could stand here and look straight downstairs …”

Firefighter Justin McBride says having more room in the bay will help. “It gets really crowded, four down there in the bay. And obviously the back of the station is in poor repair.”

But McBride’s face lights up just as he thinks of one new addition: “We are going to have a training tower as part of the new station. That is one big thing. A lot of times we want to run a quick, 15-minute drill and we have to go off-site to the parking garage or somewhere else. Now, we can do quick drills from the tower, so that’ll be really nice.”

Battalion Chief Gabe Heatherly said having more room in the bay will be a game-changer. “Right now, it’s good weather, so we have one of the smaller trucks that doesn’t have water on it parked outside,” Heatherly says. But usually, they keep everything “tucked in, secure and clean so it will last 20 years. But now, some have to sit outside because we don’t have the space. But we’ll sometimes just jam it into the bay.”

Heatherly says the bay has always been a tight squeeze, but now that they are worried a truck could fall through, “we lost more space,” he says, making it sometimes feel like working a jigsaw puzzle in order to get all vehicles to fit.

He’s also looking forward to a technology upgrade. “We do very little paper reporting — everything’s web-based, from our truck checks to incident reports,” Heatherly says. “… Some of the station’s new attributes will allow us to respond using digital maps, which we’ll have displayed out there.” 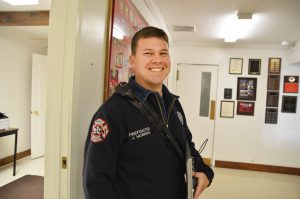 Danville firefighter Justin McBride says he is most excited about the on-site training areas the new central fire station will be equipped with. “It will really be a time-saver, since we won’t have to load up and go out to a training site.” (Photo by Bobbie Curd)

Pflug says that’s something he’s looking forward to. “We’ll have a bigger training room, where we can host in the common area.” He says now, when the fire department does community outreach, such as bringing members in to do CPR trainings, participants sit “right in the middle amongst it all,” which they both say can be distracting when learning.

“It ties us in to the community, too,” Pflug says. “I want people to say they’ve been here.”

Heatherly says the fact central station is staying on Main Street is an added plus.

“If you’re off of Main, you lose the community interaction. I know they had talked about some other properties … Even just a street back — if you were to move to Walnut Street, we’d miss the foot traffic coming from Centre, from the festivals. Everybody walks in front of the fire station,” he says. “If they have a question or a problem, they can come in and interact with us … If you were at any other location, you’d lose that almost completely. Out of sight, out of mind.”

Heatherly says interacting with the community is important to the crew.

“At station 2, there’s virtually no traffic. Someone might stop in twice a month. Here, we’ll have walk-in tours almost daily in the summertime … Somebody’s walking by, may have their kids and we stop and talk to them. Our personnel are very outgoing, so some we initiate ourselves. We’d lose that.”

“I like the location, but there’s been a fire station here since the fire department was developed,” says firefighter Joshua Agee.

“We are losing that part, but there comes a time when it just doesn’t fit any longer,” Pflug says.

Chief Heatherly says he realizes the new central fire station is quite an investment for the city. It’s the largest single amount in the capital budget, at $7.5 million proposed to construct.

“When this whole thing is done, I think the payback to the community will be two-fold,” Heatherly says. “Having a department, and now a building, that’s readily accessible to the public? That’s priceless. That investment will come back over and over.”

Cracks in the building’s foundation can be seen throughout central fire station, like this deep one in the back of the radio room. (Photo by Bobbie Curd)

A steel beam is seen above the rear bay doors of central fire station. Fire Chief Ken Pflug said crews installed them to in order to help keep the building from shifting, and cracking more. (Photo by Bobbie Curd)

One of the basement rooms of central fire station has become a “catch-all” for storage. (Photo by Bobbie Curd)

Just above the rear bay door of the central fire station, bricks are seen cracking due to the structural damage to the building. (Photo by Bobbie Curd)

Chief Ken Pflug says he’s already looked out the upstairs window at central fire station, and realized “our new station will be right there,” he says, pointing to the left of city hall. A real estate/insurance building and an apartment structure will be demolished soon in preparation for the new construction. (Photo by Bobbie Curd)
You Might Like

Members of the Kentucky School for the Deaf Class of 2019 walked across the stage and received their diplomas Thursday... read more