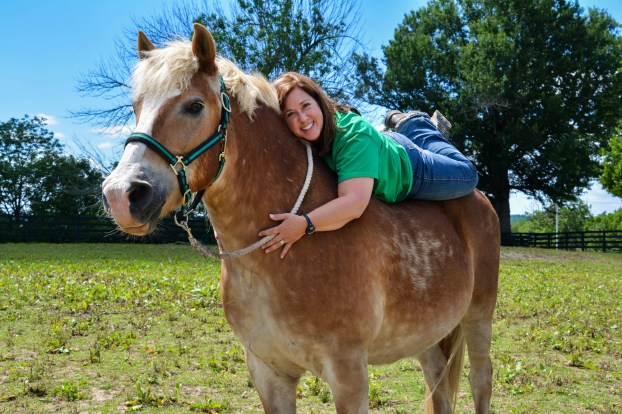 Blair Newsome, founder and director of Hooves of Hope, has announced the orgainzation will begin an at risk youth diversion program in June. (Photo submitted)

A youth diversion program for at-risk teens has been added to the list of services provided by Hooves of Hope Equestrian Center in Garrard County. 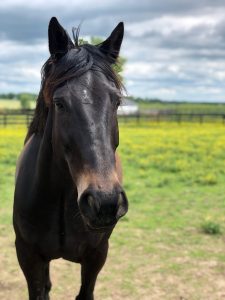 Gavin is one of the horses used in the Hooves of Hope Equestrian Center therapy program. (Photo submitted)

Blair Newsome, founder and director of Hooves of Hope, said their pilot program was approved by the state about a month ago and will begin in June. They already have a program up and running for veterans, she said. Both programs are free for the participants.

Students from Lincoln, Garrard and Jessamine counties who are eligible to participate in the equine program will be referred to the center by professional staff. “Eventually we may be able to be referred by a school counselor or mental health professional,” said program director Laura Friday. The at-risk teens may be referred to Hooves of Hope because of truancy or discipline issues, Friday said.

The curriculum she developed starts with teaching basic horse skills such as proper grooming and how to lead a horse in the arena. Students will advance to working a horse on a lunge line and getting the animal through an obstacle course without the use of a halter, Friday said.

As teens learn how to care for the horse that they choose to work with during the program, they will also be learning relationship and interpersonal skills with the people working along beside them, she added.

The bond formed between student and horse is going to teach them some things about themselves, Friday said. “It’s therapeutic in that nature but there’s no counselor.”

The goals of the diversion program are to “teach the youth about horses while also incorporating things like team building skills, communication skills, self awareness and self-regulating emotions,” Friday said.

Friday is a graduate of Asberry University and earned a degree in social work and equine science. While working at an internship, “I just saw how horses helped kids that maybe were looked at to be some way, by a teacher or adult in their life.” They were labeled at “troubled” Friday said.

When a horse walked up to those kids, it didn’t know their background, “so it’s like a fresh slate for that kid,” Friday said. The horse could only judge the student on what they were doing right at that moment. “The horse doesn’t know their history.”

“When you ask a horse to lead, you have to do it in a certain way for it to listen,” Friday said. “So it’s making them (students) listen to adults. … When they’re doing something that they don’t know how to do like move a 1,000-pound animal around an arena, they’re going to listen a lot better because they’re curious and want to learn.”

Newsome said, “And they learn that their body language and their emotions and their energy that they are either coming in with or have at that moment, it’s going to be reflected by that horse.”

“So they may find that they’re just having one of those days that they don’t want to listen, they may be stubborn. Well, most likely that’s going to be exactly what that horse is going to do back to them,” Newsome said.

When students are tasked with the job of convincing a horse to walk through an obstacle course without leading it through, sometimes it gets spooked and upset, Friday explained. 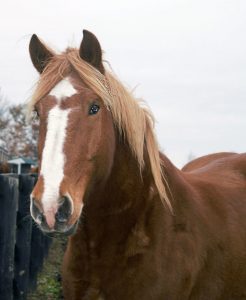 Reggie is one of the horses used in the Hooves of Hope Equestrian Center therapy program. (Photo submitted)

So afterward, they’ll talk about how to calm the animal down. “A lot of those same principles apply to people,” Friday said.

Friday said students will also write in journals after each weekly session. She said they’ll be given prompts to write about like what impacted them that day or what did they think their horse was feeling that day.

This exercise is to help with the teens’ own emotion regulation, Friday said.

Newsome said none of the participants in the program will be charged for the service. “So we have to find financial support for it like grants and stuff like that. We’re working on it. But I didn’t want to turn down a program that was an opportunity that was goal for this facility to have … because I didn’t have the funding at the moment.”

On Friday, after the Boyle County Fiscal Court went through the last bit of changes to the budget it made... read more