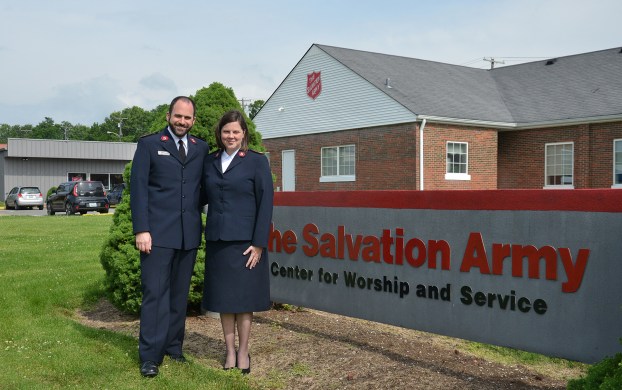 Carrie and Patrick Richmond have been transferred from the Danville Salvation Army to command the organization in Parkersburg, West Virginia. The family will be moving June 17 and the Patricks take command on June 24. (Photo by Robin Hart)

Maj. Carrie and Capt. Patrick Richmond have received their “farewell orders” and will be leaving the Salvation Army in Danville and accepting their new command in Parkersburg, West Virginia, in about two weeks.

“None of our programs at the Salvation Army will change because we’re leaving,” Carrie Richmond said.

“The continuity will stay the same. What will change is the officers, and that’s it,” Patrick Richmond said.

Salvation Army officers are typically given new commands every three to four years, he said.

The Richmond family will be moving on June 17 and take command at the Parkersburg Salvation Army on June 24. On the same days, Roger and Lindsey Galabeas will move to Danville and take command of the office.

The Galabeas will be commissioned as lieutenants this weekend, Carrie Richmond said, and Danville Salvation Army will be their first command.

“We know the community will embrace them, just as they embraced us. They’re coming in with a lot of excitement and a lot of fresh ideas and will really be able to carry on the mission of the Salvation Army, without a doubt,” she said.

“Being able to have a community who so completely embraces and supports any organization as Danville has, you can’t find that everywhere,” she added.

The Richmonds said this community has become more aware of the services and programs the Salvation Army provides. “We can’t do this without them,” Carrie Richmond said.

They have tried to make the community see that the Salvation Army is more than red kettles and Angel trees during the holiday season. “I believe that the community is recognizing more and more that the Salvation Army is more than just that. And for that, we give God the glory. … It’s just being transparent with what we receive, what we do and working with integrity and sharing our vision with our staff, with our employees, with our volunteers, and it just trickles down to the rest of the community,” Patrick Richmond said.

Because the community is more involved with the Salvation Army, whenever they have a need, people step in and help, she explained.

A recent example is several donors who have paid for bus transportation of the Salvation Army’s day camp students to field trips this summer.

And the Kiwanis Club just sponsored 10 children to attend an overnight camp, she said.

“It’s just things like that. We have needs and the community will step in and say, ‘There you go. We’re going to help you with that.'”

The Richmonds have moved seven times and have served in Nashville, Tallahassee, West Palm Beach and Ashland. They said their children know moving is part of being officers in the Salvation Army. “It’s going to be hard to leave friends — to have to enter into the unknown for a while,” she said. But on the other hand it will be exciting for the entire family to have a new adventure.

The Parkersburg Salvation Army will be the largest command the Richmonds have undertaken. It has one thrift store, an emergency overnight shelter and transitional housing.

The transitional housing is for families who have become homeless, she said. Families living there also participate in The Pathway of Hope program, which is designed “to get them out of poverty and into self sustainment,” she said.

Patrick Richmond said, “We are so grateful for the love of this community that they have shown to us individually and as part of the Salvation Army. There is no community like Danville.”

Danville’s city manager says the great news is the city has a balanced budget “without a requirement of the city... read more