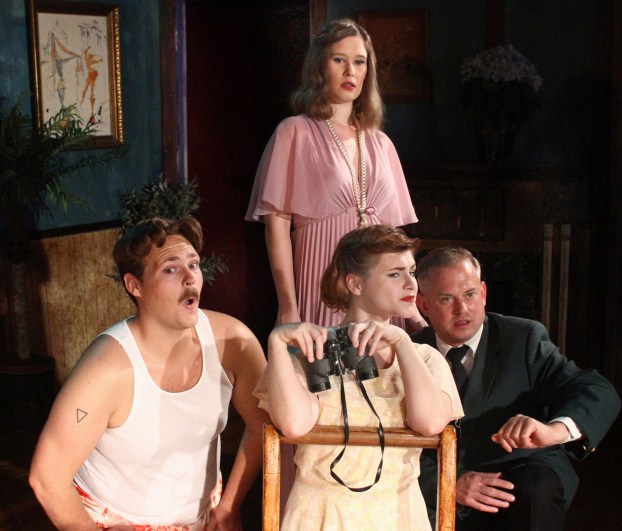 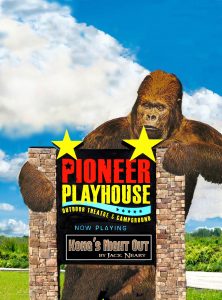 Pioneer Playhouse of Danville begins its celebratory 70th season in the Bluegrass on June 7 with “Kong’s Night Out,” a comedy by Jack Neary that pays hilarious homage to the original “King Kong.”

First produced in Boston at the Lyric Theatre and written as a fictional “backstory” to the 1930s classic movie, “Kong’s Night Out” centers around a Broadway producer named Myron, played by Lexington’s Eric Seale, who learns that his rival is planning something big in order to steal his opening night thunder. As the story progresses, all the characters, including Myron’s mother, played by Patricia Hammond, try to uncover the big secret, which of course involves an enormous primate with a yen for blondes.

“I love this show,” says Hammond, who has been returning to the historic theatre for nearly two decades. “I love my wise-cracking character, and prickly relationship with her son, Myron.”

“This is a perfect role for Pat,” says Heather Henson, managing director of Pioneer Playhouse, which is Kentucky’s oldest outdoor theatre. “When we read the play, we knew fans of Pat — and there are quite a few out there — would really get a kick out of seeing her portray this sassy Broadway broad.”

“It’s a play with a lot of energy,” says Robby Henson, artistic director. “It’s the kind of screwball comedy with doors slamming and mistaken identity that really works for us. It’s a crowd-pleaser.”

The production is directed by Anthony Haigh, who has been acting and directing professionally for over 50 years, and who recently retired from directing the theatre program at Centre College. 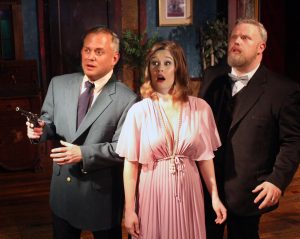 Little Willie (Drew Sutherland) has long been the sidekick of famed Broadway producer Myron Siegel (Eric Seale), pictured here with wife, Bertrille (Brittany Polk), but neither man has ever experienced a show this “big.” (Photo by Robby Henson)

“When we work with Tony, we always know it’s going to be a top notch show,” says Heather Henson.

“It’s a fine ensemble cast this year,” says Haigh. “A nice balance of new actors and seasoned veterans, working together on a witty, scatological text.”

Working together is a big part of what Pioneer Playhouse is about.

“It’s definitely a team effort putting on a show in ten days,” says Robby Henson. “From director to actors to props to building the set, every single person is important in making the magic happen.”

“Making things come to life in a limited time period, with limited recourses brings out an intensity,” says Haigh. “The intensity of the work at the Playhouse brings out the best in the actors – and in the whole company.”

In celebration of 70 years, Pioneer Playhouse will be holding a silent auction on its grand opening night. It beings at 6 p.m. and will run until approximately 9:30 p.m., the end of intermission for the kick-off play.

The auction will be set up inside the Indian Room on the playhouse grounds. A bar serving wine, beer and spirits will be open, and dinner begins at 7 p.m. — which is a little earlier than usual, for opening night. 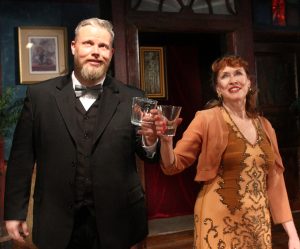 As a non-profit summerstock theater, all proceeds from the silent auction will go towards keeping Pioneer Playhouse alive and kicking.

Silent auction items include pieces by local artists, including painter David Farmer; and gift certificates to local businesses and organizations, like Bluebird Cafe, Esther’s Wellhouse, Community Arts Center, Gypsy Run Brewery, The Farm, among many others.

“Kong’s Night Out” opens on June 7, and will run nightly at 8:30 pm, Tuesdays through Saturdays, through June 22. A home-cooked BBQ dinner is available before the show each night at 7:30. Reservations are suggested for the play; required for dinner. Price for dinner and show is $35; show only is $20. For tickets, visit pioneerplayhouse.com or call (859) 236-2747.