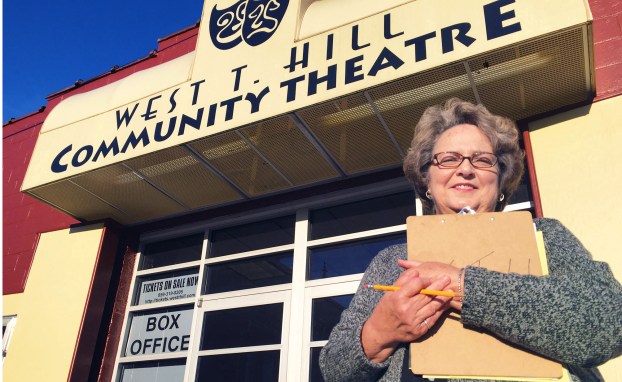 Karen Logue recently announced the 10-Minute Playwriting Contest has returned to West T. Hill Community Theatre, thanks to a patron's donation and request. The top six playwrights chosen will not only receive cash prizes, but their plays will be performed on stage in September. (File photo by Bobbie Curd)

Karen Logue opened up an envelope from a patron and found a check inside. There was also a note from the person, requesting West T. Hill Community Theatre hold another playwriting contest.

“So, I guess you could say we got a grant …” Logue says. Hence, the 10-Minute Playwriting Contest returns to WTH. The theater has held playwriting competitions before, but Logue thinks it’s been since at least 2004 when the last one was organized.

“We did it with a one-act competition, back when we were the Black Box Theatre,” she says, and once at the main theater, where WTH is now.

There will be a play-reading committee of three judges who will read plays and score them.

“The productions are so fun. And they’re not quite as big of a commitment for actors or directors, since we’re just doing the top six,” Logue says. So, not only does the theater’s managing director say the 10-minute playwriting contest is a great way for aspiring writers to come forward, but actors, too.

“Yes, it’s perfect for someone who’s always wanted to write a play but never has, but not only that — it’s the best time for people to audition, too,” Logue says. Actors will most likely be cast in more than one play, making the evening more of an “ensemble-like cast.”

“They could be in maybe two or maybe all of them,” she says. “It would be a good thing for actors who haven’t been able to memorize a full play.”

The ensemble cast will rehearse for about a month.

Logue says before, WTH received plays from all types of genres. “When we used to do this, we’d get a combination of plays, from all over the country and Canada. I think we had 100 that were submitted the last time, and that was before social media …”

She says sometimes, people who are in the midst of writing two- or three-act plays will send the theater an excerpt that will work. “Or a piece that they’re thinking about developing …”

The theater will have criteria to judge by. “And we ask them in the regulations not to put their name on anything but the cover sheet, which we tear off when we give them to the judges.”

As far as what audiences can expect, Logue says the productions will be “an evening of fun-paced theater.”

She says the contest is also good for children and students who want to try their hand at playwriting. However, Logue says she’ll stick with directing, herself.

“I’m not very good at writing dialogue — it’s just not my thing. I can come up with what looks good on stage …”

Entries for the West T. Hill Community Theatre 10-minute playwriting contest must be emailed or mailed no later than Aug. 1. Those competing may submit up to three plays.

Plays must be typed, and consist of no more than 10 pages. This does not include the title, contact or character description pages.

Plays must have no less than two characters, but no more than six, and must have reasonable content that’s suitable for community theater audiences.

Productions must be able to conform to WTH’s small stage and theater, which seats 100. Sets, props and costumes should be kept to a minimum.

For more information, email Logue with “2019 Playwriting Contest” in the subject line. For tickets, visit westthill.net.

This season marks the 40th anniversary for West T. Hill Community Theatre. A special anniversary party will be held 6:30-9:30 p.m. Sept. 14 at the Historic Shelby Manor on Arcadia Farms in Stanford.

The season will officially kick off with “Young Frankenstein” in October, after the 10-Minute Playwriting Contest winners’ pieces are produced in September.

Check back for more information on the anniversary celebration and 2019 season of plays.