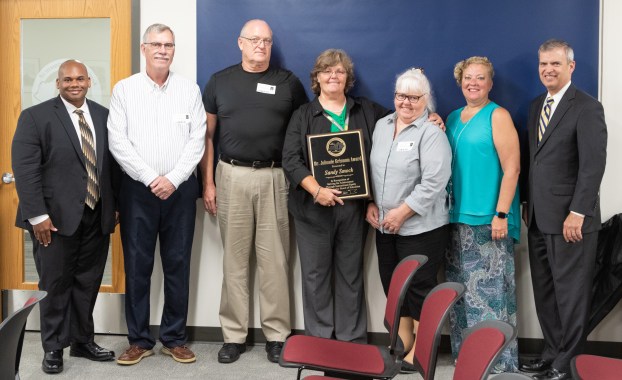 Sandy Smock had anything but a traditional path to where she is today. But if the first and only ag teacher for the Kentucky School for the Deaf had any doubts about what she has achieved, the Kentucky Board of Education put them to rest this week.

Smock was given the Dr. Johnnie Grissom Award by KBE, in recognition of her “leadership, commitment and service to promote high student achievement through instructional equity and in closing the achievement gap for all children.” It’s only the eighth time the award has been given out since it was created in 2009. 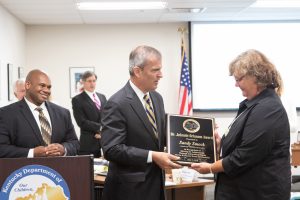 “Throughout her career, Smock has remained committed to the pursuit of growth and achievement for her students,” according to KBE. “She has been employed by KSD for 34 years and has become one of the most experienced and longest-serving staff members at the school.”

Talking about the award and the support of her friends and colleagues throughout her lengthy career brought Smock to tears Wednesday afternoon.

“It was awesome,” she said of the experience.

Kentucky Education Commissioner Wayne Lewis — the top state education official and the superintendent of KSD — and Kentucky Board of Education Chair Hal Heiner presented Smock with her award at a special ceremony in Frankfort.

Smock said everything she has done has really been a “team effort” involving others who supported her. She brought four people with her to the awards ceremony who played different but important roles for her throughout her time at KSD: Rodney Buis, a former KSD principal who hired her 34 years ago; Donna Martin, a now-retired student development supervisor for KSD; and Paul Smiley, a former KSD assistant principal; and Lee Alan Roher, Ed.D., a high school math teacher at the school. A fifth supporter couldn’t attend but was there in spirit with her, she said: Wilton McMillan, KSD dean of students who supported her efforts to become a teacher.

“These people were all instrumental in different phases of my career,” Smock said. “… I received this award today because of what they taught me. … I am who I am and what I am because of that school and the people who are employed there.”

Smock didn’t start out with plans to teach; she was a high-school dropout when she began working at KSD on the dormitory staff.

Many years later, she decided she wanted to continue her own education and earned a 2-year degree in horticulture from Eastern Kentucky University. She took another educational step a year and a half later, when she went back to EKU for a bachelor’s degree in ag education teaching, with a minor in business. She graduated with such high grades she was inducted into Delta Tau Alpha.

But while Smock continued working at KSD, she wasn’t yet a teacher; KSD didn’t have an ag program at that point.

“I don’t know how or why, but I got curious about earning a master’s degree,” Smock said. 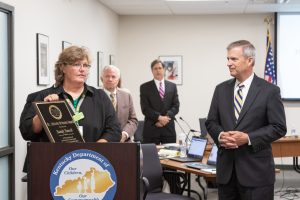 She soon followed through on that curiosity, and went on to graduate from EKU again, this time with a master’s in education administration.

Finally, the last piece of the puzzle clicked into place when KSD posted a new ag education position. Smock was nervous, but she applied. The principal at the time, Buis, told her he wanted to see big results from the new ag program — he wanted KSD to form an official FFA chapter, and he wanted to see KSD students compete in FFA at the local, state and national levels.

“I hardly even knew what all that meant,” Smock said. “I was a non-traditional ag teacher. I had never even been in the FFA. You talk about a learning curve — that was tough.”

But in November 2009, KSD got its official FFA charter, making it only the second deaf FFA chapter in the nation.

“That is a big deal because the FFA is very structured. It advances students, but it’s demanding from the mere fact that it’s competitive,” Smock said. “Communication barriers give my students a disadvantage they have to overcome to compete against the hearing chapters.”

But her students have competed — and succeeded. Last year, a student earned a first-place award at the state level for animal science; this year another student earned third place in horticulture.

Smock was nominated for the Dr. Johnnie Grissom Award by Sarah Warren, a graduate teaching assistant at the University of Kentucky who did her student teaching with Smock two years ago. Smock said Warren wrote the thesis for her master’s degree on ag programs at schools for the deaf and hard of hearing, and used the KSD ag program as a model.

“Warren describes Smock as one of the most admirable, hardworking and passionate educators in Kentucky,” according to KBE. 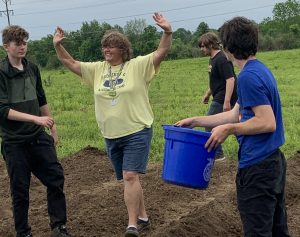 “I’ve worked with Sandy for a long, long time, and her attributes are she is highly motivated, she’s got desire — she has all those attributes that transfer over from the teacher to the students,” said Smiley, who is now retired from KSD and serving as a school board member for the Danville Schools. “When the students are with Sandy, they’re fired up.”

Roher said Smock “has a wealth of knowledge on the development of children and applying it in the classroom to nurture the kids to be successful.”

“A regular person that went into a path of education would be excited to have this. But there’s nothing regular about my path. I was a high-school dropout,” Smock said. “This lady is sitting here and she’s got (an Ed.D), and she just gave me a compliment like that. And because she’s my friend, I know she really means it. And that is humbling … it makes my eyes leak.

“Because I aspire to be a good teacher, I always have. I see those that I know are great teachers and I’ve always wanted to be one.”

“And now you are,” Roher said with a smile. “And you have the plaque to prove it.”

Boyle County Fair will be held despite sale of fairgrounds

The Boyle County Fair will be held this coming week at its normal location, even though the 30-acre tract was... read more