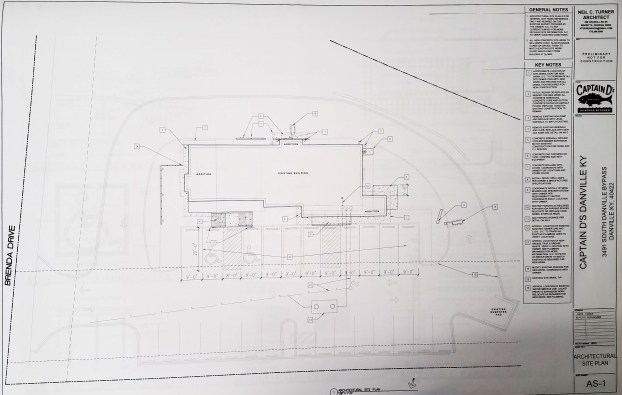 Documents on file at the Danville-Boyle County Planning and Zoning office show plans for a Captain D's restaurant to be opened in the former Starbucks building on Brenda Avenue in Danville. (Photo by Ben Kleppinger)

The old Starbucks building on the south side of Danville is slated to become a Captain D’s restaurant, according to filings at the Danville-Boyle County Planning and Zoning Office.

Cox said the addition is small enough that it won’t require any review by the P&Z Commission; work can proceed whenever the builder, BCD Inc., chooses.

The Captain D’s is being opened by Shaun Hill, who already operates the Buffalo Wings & Rings franchise that opened last year in Danville, according to Jody Lassiter, President of the Danville-Boyle County Economic Development Partnership.

“I’m so happy to say that (Hill) had such a positive experience with our community with (Buffalo Wings & Rings) that he was interested in bringing his (Captain D’s) franchise here,” Lassiter said. “It’s awesome to see a client reinvest because they see the opportunity here that we advocate to them.”

Hill said Monday the restaurant represents an investment of more than $2 million and should employ between 20 and 30 people once operational.

Hill currently operates one Captain D’s in Bardstown and said he chose Danville for a second location because of the success his Wings & Rings franchise has found in the city. There is no timeline yet for when the restaurant might open, but Hill expects to know more within the next three or four weeks.

Cox said Danville has had a Captain D’s twice before — once on Hustonville Road and once on Skywatch Drive, in the building that’s now a Zaxby’s.

Starbucks opened at the new Captain D’s site in June of 2007, according to news archives. It closed in 2008 as part of a corporate decision to close hundreds of stores nationwide. A new Starbucks location opened on Skywatch Drive in front of Liquor Barn in 2018.

Sandy Smock had anything but a traditional path to where she is today. But if the first and only ag... read more