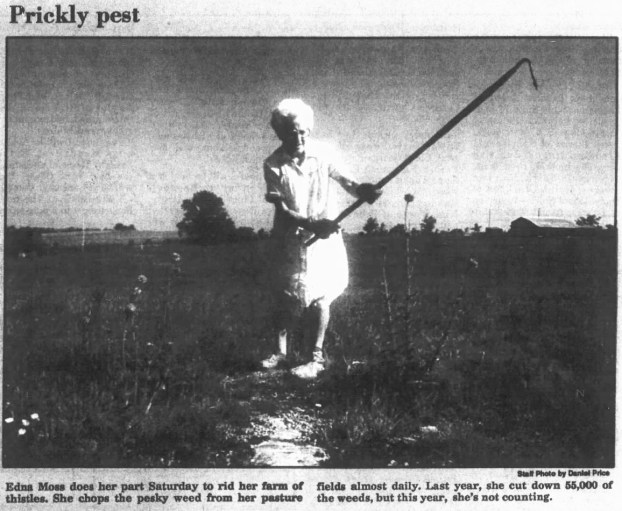 Farmer Edna Moss cuts down a thistle plant on her farm in this photo taken by Kentucky Advocate photographer Daniel Price in 1989. (Advocate-Messenger Archives)

Thirty years ago, thistles were thriving in Boyle County and exasperated farmers were at a loss for what to do.

“I’ve cut many thousands this year,” farmer Edna Moss told The Kentucky Advocate for a front-page feature on the plague of purple-flowered weeds. “I really think I’ve cut more this year. I’ve got them fairly under control now, but they will be blooming and seeding again soon.”

Jere Caldwell, a farmer on Lebanon Road, blamed a wet, cool spring for the plentiful prickly plants. The bad weather may have contributed to the failure of chemicals sprayed on Caldwell’s and other farmers’ land that was supposed to kill off the thistle plants.

The problem for farmers was thistle plants could overrun their land, making it worthless.

“If I didn’t keep at it, I wouldn’t have any pasture,” Moss told the paper. “I enjoy cutting the weeds, but I have other things to do.”

The article by Brenda Edwards, still a contributing writer for The Advocate-Messenger today, notes humorously that there is actually a state law prohibiting farmers from letting thistle plants grow on their land. But “apparently, nothing has ever been done about it nor has anyone been convicted of unlawful thistle growing.”

Caldwell, who served on the Boyle County Thistle Eradication Committee, explained that each of the plant’s prominent purple flower cones could distribute 1,000 fertile seeds and warned it was too late in the season to try anymore chemical treatments — the only thing left to do was mow or pull the weeds and hope for less ideal thistle conditions next year.

“If a thistle is chopped up good on the right day, it won’t come up again,” Caldwell said, while acknowledging Boyle County farmers could probably never really get rid of thistles for good. But “a little effort is better than no effort at all.”

Danville City Manager Ron Scott plans to retire at the end of 2019, he announced at Monday night’s city... read more