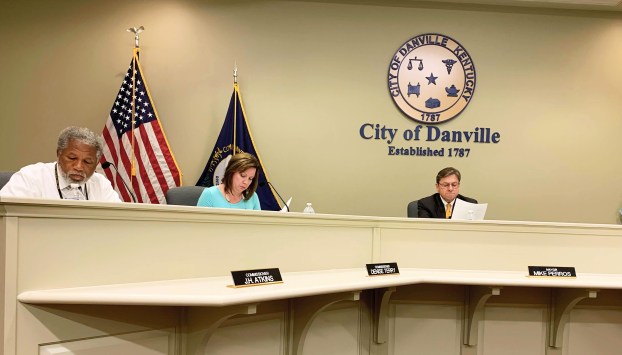 “I feel like this needs a drum roll,” Danville City Attorney Stephen Dexter told the commission Monday night. He was introducing the draft ordinance governing funding and operations of the Danville-Boyle County Parks and Recreation agency.

After the second joint meeting, held in April between the city and county over who will fund what for Parks & Rec, Dexter had agreed to create two draft ordinances — one showing a unified parks system and one showing the county only funding Millennium Park. On Monday, Dexter said when he attempted to create two different drafts, the issue “became more complex than it needed to be.”

Instead, he is proposing one ordinance “that will be easier to amend, should the county wish to strike certain portions.”

He also wants to “emphasize emphatically that this is a draft — d-r-a-f-t. It’s marked on every page in red. It’s meant to be a discussion-starter.” Dexter said he would “love it if it met everyone’s approval upon first reading. However, I’m not that naive. I know this is a starting point.”

The first major language change shows how the court and commission would finance certain buckets of cost in equal shares. Buckets consist of: 1) programming costs; 2) personnel costs; and 3) all maintenance/capital expenditures in Millennium Park, the trails system and any other park jointly-owned by the city and county. The costs associated with these three would be split equally between the city and county.

The fourth and fifth buckets are one each for the city and county, representing any expenses in parks each would solely own and solely responsible for.

A provision was also added that the city and county may enter into service agreements for certain projects, regardless of where they are located. Dexter doesn’t want the ordinance itself to be a sticking point where the Bunny Davis center or a future aquatic center is concerned.

“We had an engineering report that says Bunny Davis has outlived its useful life, why do we want to rope it in and create a monkey wrench, so to speak, and throw the progress of the future of Parks & Rec on the Bunny Davis center,” he said, and added that he doesn’t think the city or county want to do that. 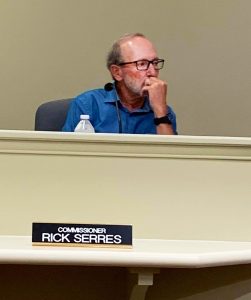 The idea of the “buckets” came from what Dexter said he’s surmised from past conversations; what he had gathered the city and county actually do agree on.

Commissioner Rick Serres said the bucket-theory is interesting. He said as for referring to costs,  “looks to me that (Parks & Rec Director) John (Bell) and his board can say we want to program certain parks owned by the city, are you willing to help fund that.”

The draft clarifies that the city’s supply of water, sewer and stormwater services to the parks will be counted as part of the city’s share of contributions to the parks system, which the city currently provides and always has, Dexter said.

City Manager Ron Scott said this is most specifically in relation to Millennium Park. “The city has not — to my knowledge — previously sought to have those costs applied or credited to its annual funding of Millennium … By ordinance, there is no ‘free water’ and also by ordinance, everyone pays stormwater.”

The draft also specifies the city manager (“or his/her designee”) and county judge-executive will serve as ex officio members, “as advisor and observer to the board.” That change was made to enhance collaboration between entities, Dexter said.

The requirement in the ordinance that the Parks & Rec board retain its own attorney was stricken, Dexter said. “We think that’s duplicative and why would you fund that — it’s unnecessary if we’re going to be in a collaborative situation.”

Instead, it was added that in the event legal counsel is necessary, the city and county “shall provide the use of its respective counsel.”

For budget reports, the draft requires Parks & Rec to include six separate sections under expenditures, which relate to the different buckets of cost. However, Dexter listed the trails system expenditures on its own because he said it’s unclear if the county is “committed to investing in the county-wide trails system.”

He said that the remaining two buckets — one for city and one for county, to pay for expenses within their own parks — could be used as a wishlist for what the parks agency thinks is desirable.

“The county will look at that bucket and say ‘we want to do x, y and z,’” he said, and likewise for the city. “You’d make the determination of what you have the fund to advance or not.”

The draft moves the budget due date for Parks & Rec from February to April, and requires a joint meeting to be held by the city and county by the end of February each year to establish funding actions.

Dexter said requiring the agency to finalize its budget before setting its funding level is unfair, and this is a more organized approach. The draft includes a provision for the absence of a joint meeting, and says the city and county “may separately establish in their respective budgets the level of funding for said costs, but said amounts shall be equal in both budgets.”

Dexter said since there haven’t been regularly-held joint meetings for almost a decade, he didn’t want funding to fail due the city and county failing to schedule a meeting. “That’s a backstop, not something we’re advocating. Just for the absence of a joint meeting.”

The draft also states the city and county reserve the right to audit the books and records of the board, and the board must electronically transmit a copy of its monthly ledger to the city, which the city has enacted for all agencies receiving $25,000 or more in funding.

“In order for the Parks & Rec board to focus on what it should be empowered to do, which is to program for the city and county parks …” Dexter said, the parks board will assume responsibility for mowing and maintenance of all playing areas — anything inside parks fences or utilized for programming.

However, outside of those playing areas, there’s still a lot of mowing to do, Dexter said. In order to be the most cost-effective, he said they should allow the extra mowing outside of playing areas to be an alternate bid item in the city’s annual mowing contract.

“The cost will be known and presented at the joint meeting …“ Dexter said. So, he said, the city will do the work and invoice the parks board just like it does on other cost-sharing arrangements. “The county would pick up half the tab for Millennium Park and the trail system …”

Dexter said hopefully, this new arrangement “will allow a cohesive approach to landscaping our parks in a unified manner with our beautification contracts” as well as being more cost-effective.

“As a courtesy to the county, the city will also add another alternate bid item for its annual contract to include county-owned parks only,” Dexter said. “And then offer that to the county, should they wish to benefit with a larger-sized contract at a price that could benefit them — that could be included in on their funding mechanism as well.”

Mayor Mike Perros asked if the draft ordinance has been run by new parks director Bell. Dexter said City Manager Ron Scott is the only person who’s reviewed it, calling it the most proper chain of command.

“Not only proper, but advisable, because we want to have the first stake at explaining it. When you release a document, sometimes it gets legs before its explanations.”

Perros asked Dexter to reach out to County Attorney Chris Herron to discuss the draft. “Then he and perhaps you in tandem can appear at a future fiscal court meeting to explain this, and have some unfolding of a rational conversation here.”

Dexter said he is happy to do that. “In the absence of the presence of a city official or myself at that meeting, sometimes people can assume things from the ordinance by the way certain things are written that are completely unintentional. We experienced that from 911 — that sometimes I may simply be inartful or inarticulate in attempting to draft. It’s not my intention … “

He was referring to the 2017 dispute over 911 funding which almost brought the two entities to court against each other, before an interlocal agreement was reached.

“In my mind, I want to avoid a 911-like disagreement or conflict … Your draft document, as I see it, is clean, forthright. I don’t see a whole lot in here that you can misunderstand or misinterpret,”

Dexter said he would send the draft ordinance to Judge-Executive Howard Hunt and Parks & Rec Director Bell after the meeting, and let them disperse the draft to their respective members.

Dexter said his hope is that the fiscal court will reduce their collective comments to writing. “Not a comment that one particular magistrate has about one particular issue.”

Dexter said he hopes the parks board will review the document and make changes to present to the city, as well. “Likewise there may be other interested groups who want to make comments, and I think they should be heard.”

A free event to give people information on how to have their criminal record expunged is scheduled for the second... read more