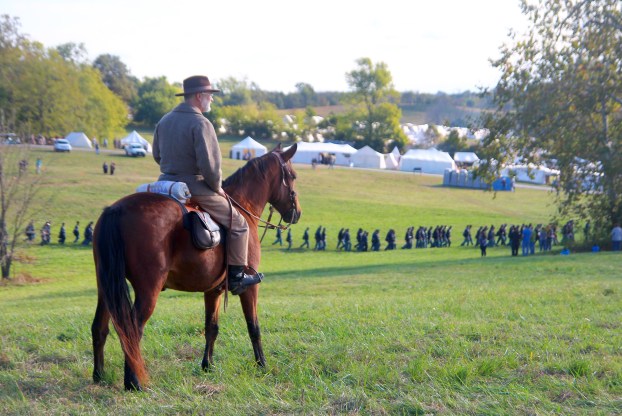 (File photo by Ben Kleppinger) A reenactor surveys the scene at Perryville Battlefield, during reenactments held as part of the 155th commemoration of the Battle of Perryville in 2016.

What Boyle County might lose in property tax revenue from further expansion of Perryville Battlefield State Historic Site would be more than made up for by increased tourism from reenactments, park manager Joni House told Boyle County magistrates this week.

Plans are in the works for the American Battlefield Trust to acquire a 128.5-acre piece of land known as the “White Tract,” which is one of only a handful of properties left in the county that were part of the original Civil War battle in 1862, but are not part of the historic site today.

“It is of the national significance of Shiloh, Gettysburg and Antietam,” she said. “… It is not just a little bitty old battlefield out in western Boyle County, it is a national historic landmark of significant importance for our community and our nation.”

And the land that is the White Tract today is where some of the most violent fighting in the battle occurred. House read an account from a soldier who fought there to magistrates Tuesday.

“We did not recoil, but our line was fairly hurled back by the lead hail that was poured into our very faces … we were right up among the very wheels of Napoleon guns. It was death to retreat now to either side. Such obstinate fighting I have never seen before or since …” she read from the soldier’s account, before concluding, “That is simply the most hallowed ground in the state of Kentucky.”

The fiscal court voted in April to serve as the “government sponsor” for a grant that would pay for half of the approximately $1 million cost to buy the land. At that time, Magistrate Phil Sammons said “enough is enough” and questioned whether it was worth losing property taxes on the land, which would be exempt once it becomes part of the battlefield.

“My point is another 100 acres is not going to bring any more tourists to this town than it does right now,” Sammons alleged at the time.

But in 2016, when the battlefield held its last major reenactment on the 155th anniversary of the original battle, it generated a $1.35 million economic impact for the local and regional community, House said.

“That’s a pretty good hunk of money, folks, just for that reenactment,” she said.

House went on to note the battlefield is heavily used by both teachers and members of the military. Classes of students participate in many educational programs at the site, and soldiers studying military strategy visit Perryville Battlefield regularly to examine mistakes made during the battle, she explained.

“The local community — I can’t tell you how much they’ve used that. They hike, they run, they bring their dogs out. I see people on that park all the time and the playground is full of local families,” she said. “I think the soldiers would be OK with that. I think they would be glad to hear that laughter on the battlefield.”

House noted the battlefield is also of importance in preserving rare species, which continue to live on the preserved battlefield land when they have disappeared in many other places.

House said if the White Tract can be acquired for the battlefield, she can “guarantee” there will be another big national reenactment in 2021 for the 160th anniversary.

“The reenactment community is shrinking and you really have to be able to pull something in to (attract) them,” she said. “The White Tract … is that important that we can get that national reenactment. So we’re looking at about $4,000 a year offset by $1.5 million in one year. So really it is an investment. I know there’s a lot of county taxes coming off there, but when you look at it opposed to what we can make happen with that land, it’s more significant, I think, if we protect it.”

Local business owner serves up cupcakes for her community

At 9 a.m., Shana Followell is already sporting a light dusting of powdered sugar. Although today is a time-out from... read more