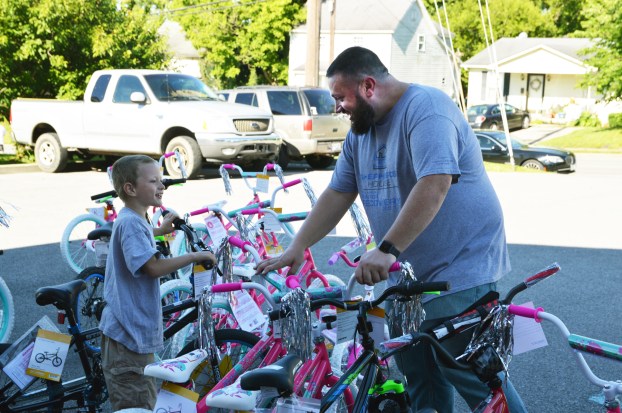 Shepherd’s House accepted more than 100 donated bikes for area kids, and set them up on site Friday outside of the intensive outpatient treatment center on South Third Street.

Staffers were on hand to help families choose the right bikes for their little ones, as well as load them into vehicles.

The bikes were all donated over the last two months. Program Director Roger Fox said this is the second year the center has held the bike drive. 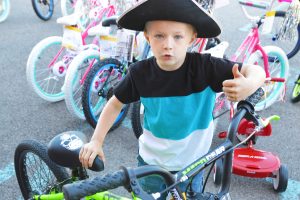 Raven Morehead says, “Cool,” and gives a thumbs-up when asked how he feels about getting a new bike Friday. (Photo by Bobbie Curd)

“We like to do something to give back to the community, and what better way to do that than with the kids,” Fox said. He said everyone should be able to have that cherished memory of what it was like to get their very first new bike, something some children never get the chance to experience.

Shepherd’s House bought about 15 to start the drive off with, but the rest of the 102 bikes were all donated by caring community members, Fox said. Most of them still had the price tags on them.

“We really got the word out this year. Last year, we really didn’t know what we were doing, and we just kind of threw it out there …” Fox said. But this year, they reached out to places like Mercer County Schools, the health departments in both in Boyle and Mercer, as well as several area churches.

“And (Danville Housing Authority Director) Tim Kits really really helped get the word out,” Fox said. “They sent a huge list to us of families, so we’ll deliver the bikes over to them later today, and they’ll disperse them for us.”

Fox said there was no criteria set up for who could get a free bike. “We just worked through others who do outreach and knew families who were in need. We will donate what’s leftover around town to some other places, too.”

It was also a great send-off for Fox; Friday was his last day with Shepherd’s House, after two years heading up the Danville center. On Monday, he begins a new position at Isaiah House Treatment Center in Willisburg.

“The people I’ve worked with here will always be my family,” Fox said.

Junction City is getting a second firetruck, which will enable its fire department to be better equipped when answering emergency... read more