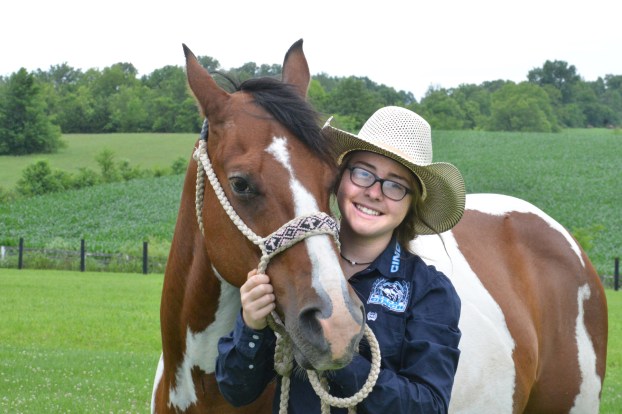 Mercer tween honing her skills in prep for national competition

Getting down and dirty is what 12-year-old Alexis Laughlin will be doing when she competes in the National Junior High Finals Rodeo during the next few days in Huron, South Dakota. 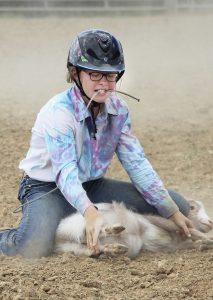 Alexis Laughlin competes in the goat tying competition at a recent rodeo. She is competing the national competition in the same event this coming week in South Dakota. (Photo submitted)

Alexis is a member of Kentucky’s National High School Rodeo Association’s junior high division. She found out in mid May she had qualified to compete in two events of the national competition — goat tying and pole bending.

Alexis will be a seventh-grader at King Middle School in Mercer County.

Her mother Maureen Laughlin said Alexis is fourth in the state for pole bending and third for goat tying in her division.

Pole bending is when a rider maneuvers the horse through a series of spaced out poles as fast as they can without touching them. The average time is about 23 seconds, Alexis said.

In goat tying, the rider gallops from a starting point and abruptly stops where a goat is tethered to a 10-foot line. The rider has to jump off, run to the goat and tie its legs together, where it has to stay for six seconds, Alexis explained.

Times usually range from 8 to 12 seconds, Maureen said. Alexis averages about 11 seconds. However they recently watched a high school rider do it in 5 seconds, which was amazing, Maureen said.

Kentucky’s NHSRA hosts three rodeos for its members in the fall and three in the spring. All of the points riders earn from the six rodeos are added together and the top four highest point earners in each event are invited to the national competition, Laughlin said.

Alexis has always been interested in horses. She first took horseback riding lessons while she was in third grade in Lexington where she rode with an English saddle and jumped.

“But I didn’t like it. So I tried rodeo, and that’s what I stuck with,” Alexis said.

She competed for two years with the Southern Indiana Junior High Rodeo Association, and this is her second year competing in Kentucky.

Alexis said she learned how to ride with a western saddle and compete in rodeo events by “hanging out with a lot of people who rodeoed, and they just taught me.”

Since moving with her family to a small farm on Claunch Road in Boyle County about a year ago, Alexis has been riding with and learning from other students at the Triple Cross Cowboy Church group in Harrodsburg. She also practices her rodeo riding skills around barrels and poles in the arena her family set up on their property.

Thursday evening, the Laughlins loaded up their large horse van, which doubles as a camper, with enough horse feed, hay and supplies for a week, and Carol, Alexis’s 19-year-old brown and white paint horse. This year they’re also taking a second camper because Alexis is taking a friend to the week-long competition. 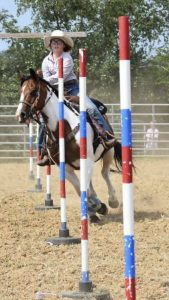 The 1,000-mile trip to South Dakota is tiresome for everyone, Alexis’ dad T.J. said. “It’s a long haul.” They’re planning to arrive in Hulon today (Friday), which will give Carol some time to stretch her legs and get accustomed to the surroundings and arena, T.J. said.

When Alexis got Carol two years ago, the horse didn’t know anything about how to be a rodeo horse, she said. “I had to teach her all of it.” Just like she did her first horse, TK, who was 28 years old when he last competed.

Carol learned quickly and as her first year as a rodeo horse, she and Alexis went to the national competition for goat tying. “Carol, she knows her job, so she always wants to run,” Alexis said. “She’s eager. She knows what she has to do.”

The NHSRA features about 1,000 riders from 44 states, Canada, Australia and Mexico and is the world’s largest junior high rodeo. About $80,000 worth of prizes and more than $200,000 in college scholarships will be awarded at the rodeo, according to a news release.

Alexis said she loves to ride fast and hang out with friends at the rodeo. “It’s pretty cool to meet all the kids,” she said.

And she enjoys the comradery at the competitions. “They all support each other, and they’re rooting for each other even though they are competing against each other.”

In addition to pole bending and goat tying, Alexis also competes in barrel racing and is just starting to learn break away roping, she said.

The Triple Cross Cowboy Church is a branch of Harrodsburg’s United Methodist Church and is the biggest supporter of kids who are interested in horses and rodeo riding, Maureen said. “Rusty Crider started it to have kids come out and get exposed to horses,” she added. The group of students and adults meets every Thursday night all year round at the pavilion, have dinner, ride horses and even have Bible study on horseback, T.J. said. They also practice rodeo riding skills in the arena.

Triple Cross also sponsors three rodeos a year and just started a youth rodeo series, where students don’t have to have their own horse to participate. The next event will be in July. More details are to come.

About two and a half inches of rain fell within a three-hour time span Thursday morning causing some roads in... read more