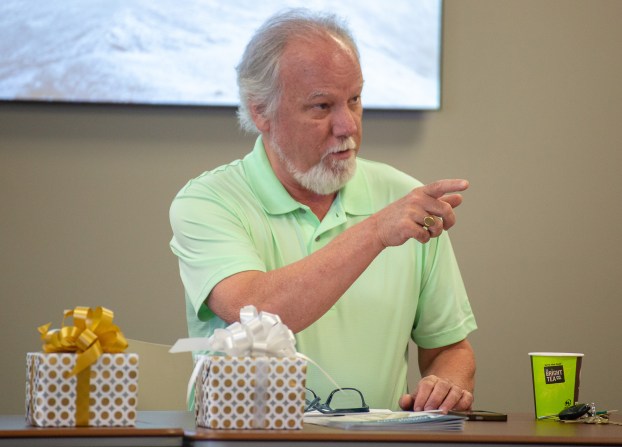 Ben Nelson doesn’t have time for drama. That’s a figure of speech, since he actually has a little more free time now than he has for the past two and a half years.

“Less drama, more unity” is the mantra Nelson says he stuck to during his time as chair of the Danville-Boyle County Economic Development Partnership. He believed in the power of cooperation long before helming the EDP Board of Directors and he continues to believe in it now that the June EDP meeting — his last as chair — is adjourned.

“We still have drama,” he concedes, “but I’d say we have more unity and less drama. You won’t ever get rid of it totally, I guess, but we’ve come a long ways.”

If you want to know how Nelson got into economic development in the first place, it’s a long story, he says with a smile, but he’ll tell it anyway. 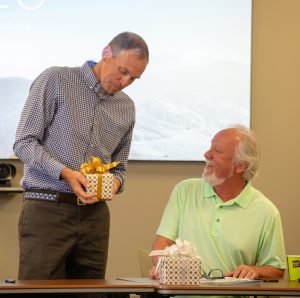 It turns out it’s not too long, at least in summary format: He quit his corporate job in Dallas in 2007, relocated to Danville and bought Maple Tree Gallery on Main Street with his wife because they “needed something to do.”

He got involved with the Heart of Danville and the Chamber of Commerce in trying to strengthen cooperation among local merchants and revitalize the downtown economy. From there, he served on the Chamber board, the Heart’s board, and then the EDP board. He was vice chair in 2016 before taking over as chair in 2017.

Nelson took the top spot at a transformational time for the EDP — it was completing a strategic economic development plan and implementing some of its initial recommendations for a significant reorganization of the EDP’s structure.

The strategic plan that sparked much of what the EDP has tackled over Nelson’s tenure was actually the brainchild of Nelson and Danville City Manager Ron Scott, who came up with the concept over a cup of coffee at the Hub.

But is the strategic plan the thing Nelson’s most proud of? Not really.

“I think it’s watching the reorganization of the board and watching this board move from what it was, to becoming a working board with working committees,” Nelson says. “Before we did all this in 2017, this board met once a month and it was like listening to an infomercial.”

Nelson says he’s most proud of all the citizens who have taken an interest in and ownership of economic development, by serving on the EDP board, working on EDP committees and contributing to workforce development, as just a few examples.

“This isn’t just a Jody job,” he says, referring to EDP President Jody Lassiter. “It’s us pulling together. I think that’s huge. I hope that continues to evolve.”

Nelson says he didn’t think it would take as long as it did for the EDP to move away from more dramatic discussions and onto focusing on economic development projects.

Nelson says a very important aspect of success for the EDP involves intentional transparency, sharing as much as possible about economic development efforts with the public without compromising the necessary confidentiality needed to attract prospective business projects and see them through to completion.

“The only time we’re going into closed session is when it’s a reason of competitiveness,” he says, acknowledging the importance of including the public in the EDP’s work. “… How do you balance that? I want to be seen as a good servant of the community, but I still want to protect our competitiveness” for new projects.

That’s a fine line to walk sometimes, and tricky enough that Nelson says he never made it all the way off the “learning curve” his entire time with the EDP.

He says he has encouraged Lassiter to share more with the EDP and public about the projects he is pursuing, and he has advice for incoming Chair Marty Gibson, too:

“The role of the chair is to create an environment that the different partners want to communicate and collaborate,” he says. “So a lot of it is building good will with the fellow board members and the credibility with the board members that you’re trying to do the right thing.”

Gibson presented Nelson with a parting gift — from Maple Tree Gallery of all places — as part of Nelson’s final meeting Wednesday. Gibson thanked Nelson for the “absolute, unbelievable amount of time you have put into this organization and this community.”

Nelson says he will miss working with so many of the community’s people through the EDP, but there’s also a feeling of relief — “I think it’s time for a new perspective and a fresh set of eyes.”

“I think this partnership is poised to hit some home runs. That’s what I’m hopeful for,” he says. “… I leave with the same basic beliefs I came in with, which is we’re better together. … The biggest need in our community is that we stop beating our war drums and get in the boat and row in a common direction.”

After a brief executive session at the end of Wednesday’s meeting to discuss confidential details of a couple potential projects in the works, Nelson brought the board back to order in public session for the last time. Then, there was nothing left on the agenda.

Among the numerous laws passed this year that go into effect next Thursday is one that should have been in... read more