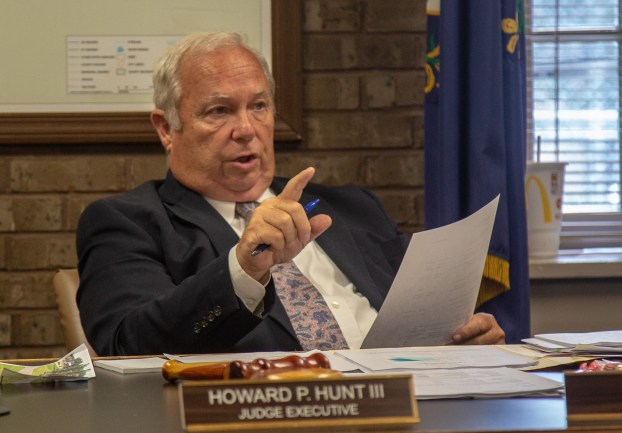 Boyle County Judge-Executive Howard Hunt leads a meeting of the Boyle County Fiscal Court in June. The court voted last week to have Hunt sign a letter of support for a grant-funded project that would improve access between Richmond and Danville along Ky. 52. (File photo by Ben Kleppinger)

A planned upgrade for Ky. 52 could make it faster and easier to travel between Danville and Richmond. Boyle County Fiscal Court officially stated its support Friday for the project, which would construct a new connector road in Madison County.

Madison County is applying for a grant to help speed along the project, which would widen Ky. 52 and realign it to connect with Duncannon Lane/Ky. 2872, providing direct access to Interstate 75 at Exit 83. The approximately $12 million project would build 6.8 miles of road and result in shorter travel distances and times between I-75 and Lancaster, according to information from Madison County Fiscal Court.

“Ky. 52 is the only east-west route that travels completely through Madison County,” according to the Madison court. “Currently, people traveling on Ky. 52 between the city of Lancaster and Exit 83 of I-75 must navigate a series of small, rural roads that provide indirect access and often lead them away from their destination.”

The project improves access to I-75 for Garrard, Boyle and Jessamine residents; is expected to reduce roadway fatalities thanks to shorter commutes and “improved roadway geometry;” will help the area’s “economic competitiveness;” and has sustainability benefits thanks to “reduced emissions from fewer vehicle miles traveled,” according to Madison County.

Since Ky. 52 runs from Richmond to Lancaster to Danville, Boyle County Judge-Executive Howard Hunt said the project “enhances access to this area from a main artery, I-75.”

Boyle County Magistrate Jason Cullen said he thinks the total commute time between Danville and Richmond could be cut by “a third.” And the new road will also improve the connection between Danville’s airport, the Madison County Airport and Eastern Kentucky University, allowing EKU to potentially use the Danville airport more for its aviation program, Cullen said.

“Our overall relationship with EKU will be strengthened by this,” he said.

Boyle Magistrate Phil Sammons noted “the main problem is trying to get from here to Lancaster.”

The Boyle resolution passed Friday states the fiscal court “wishes to show enthusiastic support to the Madison County Fiscal Court in their submission of the 2019 BUILD Transportation Grant Program for the widening of Kentucky Highway 52.

STEAM in the summertime