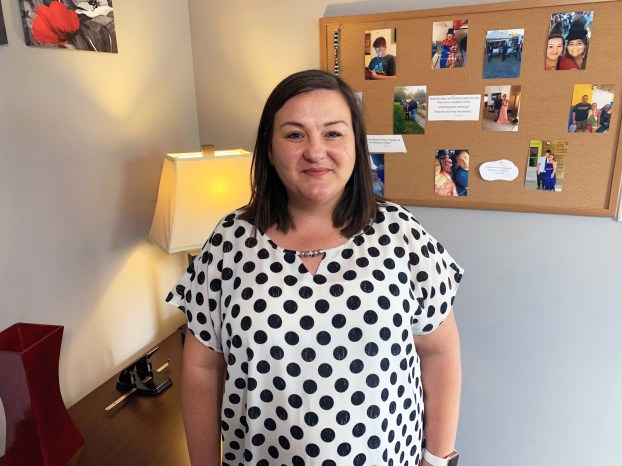 Tanith Wilson said she is excited to see Shepherd’s House work on expanding and offering all services to clients under one roof. (Photo by Bobbie Curd)

Getting used to life on the outside again has been the biggest change for Tanith Wilson in her new position. She was previously the director of the substance abuse program (SAP) at the Boyle County Detention Center, administered through a contract with Shepherd’s House.

Wilson is now charged with directing the operations for all of the organization’s Boyle County programs. She oversees the center on South Third Street, as well as the SAP at the jail.

“There is a big difference,” Wilson says about now having an office at Shepherd’s House. She has worked inside the jail for the last two years. 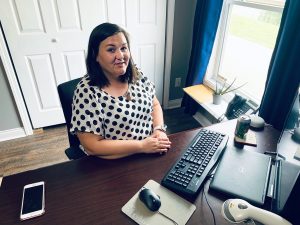 Tanith Wilson says there is a big difference between her office at Shepherds House and working inside the jail. Clients coming to the program have many additional needs they need help with like housing and employment. (Photo by Bobbie Curd)

“Those clients are contained, so we don’t have to worry about all of their risks.”

Although she has worked at an IOP before — an intensive outpatient program — as well as drug court, she says one of the adjustments has been going back to a program where the clients aren’t contained, and have lots of needs.

“It’s everything from employment and help with finances, some are returning from jail and don’t have money to pay bills. They have no safe, sober housing. Some are leaving the program here and going home to roomates who use and drink or family members who use and drink.”

She says the jail provides prisoners with food and clothing, and “there are no drugs and alcohol to deal with, so it’s actually easier in that sense.”

There are a whole new set of problems clients have to deal with on the outside, she says. “We have to look at their housing, what we can do to make that better, look at the employment history and financial problems. They may have no daycare, no food …”

Wilson said the center is currently “trying really hard to put some policies and procedures in place that help with those services.” Shepherd’s House has hired a new office manager, Jordan Brayton, who has a degree in addiction counseling and will be going for her license soon.

“We hired a LPCC (licensed professional clinical counselor), who will be our therapist so we no longer have to refer out for those services …” Wilson says, referring to new employe Kirstin Spillman. “We had a great staff before, but I think we’ve made some positive changes.”

Wilson says Shepherd’s House is moving in the direction of specializing its staff so it can offer more services on-site.

“We’re focused on treating the whole person, and providing all those things in-house.”

Wilson will also be directly supervising SAP at the jail, which is now directed by new employee SaraBeth Wells.

“Both of our staff members at the jail are relatively new, so we want to make sure all transitions go smoothly. I will supervise that program to make sure it stays up to standards,” Wilson says.

As far as working in her new digs, Wilson says she does miss the clients at the jail. “And I miss the staff. Brian (Wofford, jailer) is amazing — he’s very pro-recovery, so I do miss working with him, and our Class D coordinator. I miss seeing everybody, but I will still be in and out.”

Wilson’s new position was created due to Shepherd’s House ongoing expansion, she says. “We just got the Fayette County SAP program, so that will be starting up soon. And there’s the residential program already in Lexington … so Jerod (Thomas, president/CEO) is trying to make sure each program is adequately supervised.”

“We’ve got more letters now than we’ve ever had,” Thomas said, referring to his licensed employees. Thomas said Shepherd’s House mantra is “treat the whole person” — and day treatment IOP is the answer.

“There’s treatment, time blocked out for it, but there’s more than that. The rest of the time, you’re doing community service, resume building, GEDs, everything you have to do in order to be a complete citizen,” he said.

And not to knock anyone who worked there in the past, Thomas said, “but the staff up there is the best staff I’ve ever had. Tanith ran a treatment center for 11 years, is the most talented at running programs.”

So instead of “letting her run one, I’m going to let her run them all,” Thomas said. “Anything we do in Boyle County, she’s the boss.”

This CBD oil business is eyeing Danville, Kentucky for a 34-job, $6 million operation