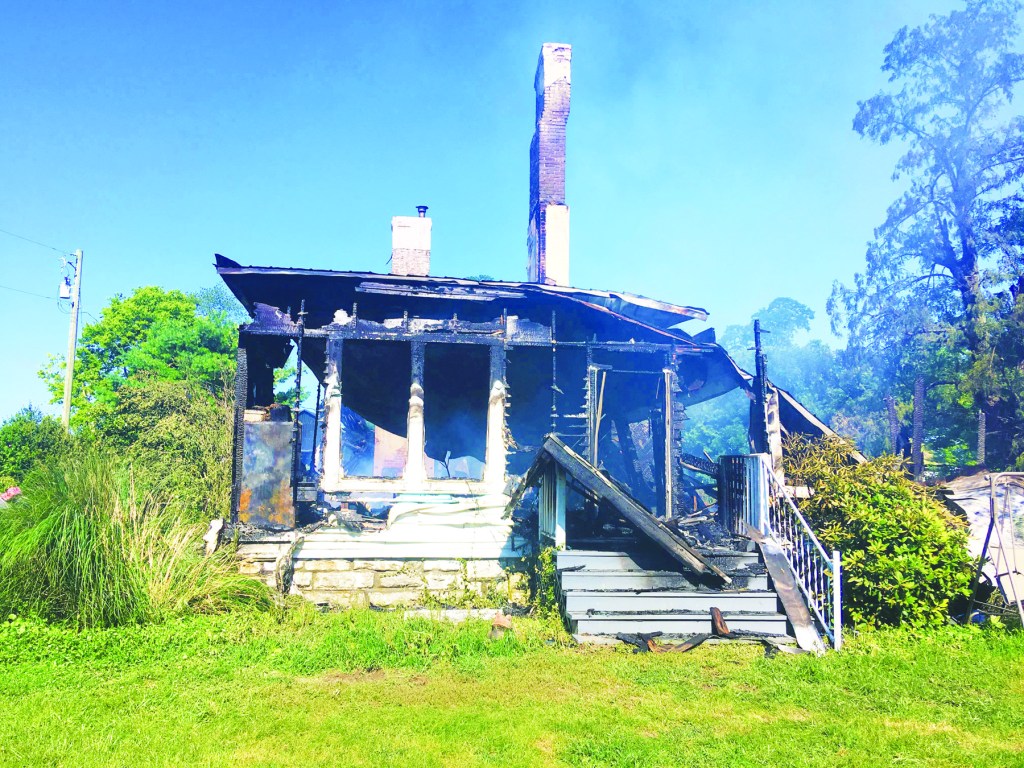 Heather Henson’s home, at 1236 Buster Pike, near the Boyle-Mercer county line, was completely destroyed early Saturday morning by fire. Henson, her husband, Tim Ungs, and their three children made it out of the fire safely. The cause of the fire is unknown. (Photo courtesy of Heather Henson)

Heather Henson, her husband Tim Ungs and their three children made it out of their burning house alive early Saturday morning. Henson recalls grabbing her cell phone, and seeing it was 1:30 a.m. when they fled their home at 1236 Buster Pike.

“When the dogs were barking so loudly, I thought they were barking at an intruder, so I grabbed my phone,” Henson said. But instead, they found three-quarters of their home engulfed in fire.

The family — Heather Henson and Tim, Daniel, Theo and Lila Ungs — had been working at the family business, Pioneer Playhouse, for the evening on Saturday. They’d only been home since about 11 p.m.

“The dogs saved our lives,” Henson said, becoming emotional. Gracie and Elbee haven’t been found yet, although the family has been out looking for them, calling their names and leaving food nearby since the blaze destroyed their home.

Henson is not sure they made it out, but said the family hasn’t given up hope. 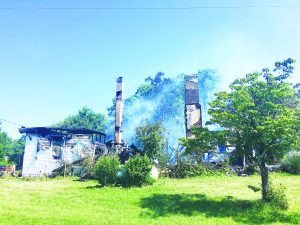 Heather Henson’s home, at 1236 Buster Pike, near the Boyle-Mercer county line, was completely destroyed early Saturday morning by fire. Henson, her husband, Tim Ungs, and their three children made it out of the fire safely. The cause of the fire is unknown. (Photo courtesy of Heather Henson)

The smoke detectors didn’t wake the family up, she said — the dogs did. “The firemen are saying it’s possible; they’ve seen it so many times where dogs escape during a fire and run away,” Henson said, but she doesn’t remember them getting out during the family’s struggle to escape through the only exitway that wasn’t engulfed.

Henson and her husband were on the first floor when the dogs woke them, barking feverishly. “We ran in and the back porch was already engulfed, it was coming into the kitchen at that point,” so they began yelling for the kids, who were upstairs in their bedrooms.

“We were just screaming about getting the kids out, but the smoke was already very thick … Lila came down, and the boys couldn’t make it down due to the smoke,” Henson said, so Daniel and Theo went out the window of the second floor, and were on the porch roof.

“Tim and I didn’t know, and he went back in for them,” she said. She then discovered the boys on the porch roof as one jumped to the ground. She was attempting to get the other to jump as well when they heard Tim inside, yelling for the boys.

“He got disoriented from the smoke — we weren’t even sure he was going to make it,” Henson said. “I tried to go back in, but it was too much. We were all yelling at him from the front so he could hear us and make his way out, and he made it.”

By the time the family escaped and knew everyone was OK, they called 911 — “and it was pretty much gone. It was pretty fast,” Henson said.

Burgin Fire Chief Lewis Sexton said it was fully engulfed by the time crews arrived. In addition to Mercer County Fire, Boyle County Fire also responded as mutual aid, since the home is near the Mercer-Boyle county line, Sexton said.

It took four hours for crews to extinguish it, with four engines and five tankers. No one was hurt in the incident, however some of the family was taken by personal vehicle to the ER to be checked for smoke inhalation.

The fire was contained to only the home.

“No cause has been determined; it’s under investigation. We don’t suspect any foul play,” Sexton said. “It’ll be ruled as accidental, as far as we know.”

He said it’s a common occurrence after home fires to hear the owners say their dogs actually alerted them to the fire. “They smell smoke before we do,” Sexton said.

He said the family is “lucky they got out, with the size of fire it was.”

Longtime family friend Laura Jack has set up a GoFundMe account to help the Hensons.

“They literally left their home with only their clothes on their backs,” Jack said. Many in the community have been reaching out, she said, asking how they can help. And while bringing clothes and other items to the family is thoughtful, Jack said they no longer have any “space for receiving anything.”

“This is an easy way to help support them as they try to figure it all out,” she said. To make a contribution, look for the Henson/Ungs House Fire at GoFundMe.com.

“We’re all just extremely thankful they all got out and are safe,” Jack said.

“It’s awful, it’s scary, it sucks. Yes, our life has been turned upside down,” Henson said. The family lost everything they owned, “but we’re OK. That’s the main thing. And the dogs saved our lives.”

Henson said the home was built in 1900 by her grandparents, and was the home her mom, Charlotte, grew up in.

“So many friends who have come forward, and it’s amazing. We’re so lucky and grateful,” Henson said.

Work continues at the playhouse, which is in the middle of its annual summertime shows.

“And of course, this is the busiest time with our third play opening up Tuesday night. So many volunteers and people have been coming forward to help,” she said. “But, it’s like — wow. It can happen so fast. You have to be grateful for everything.”