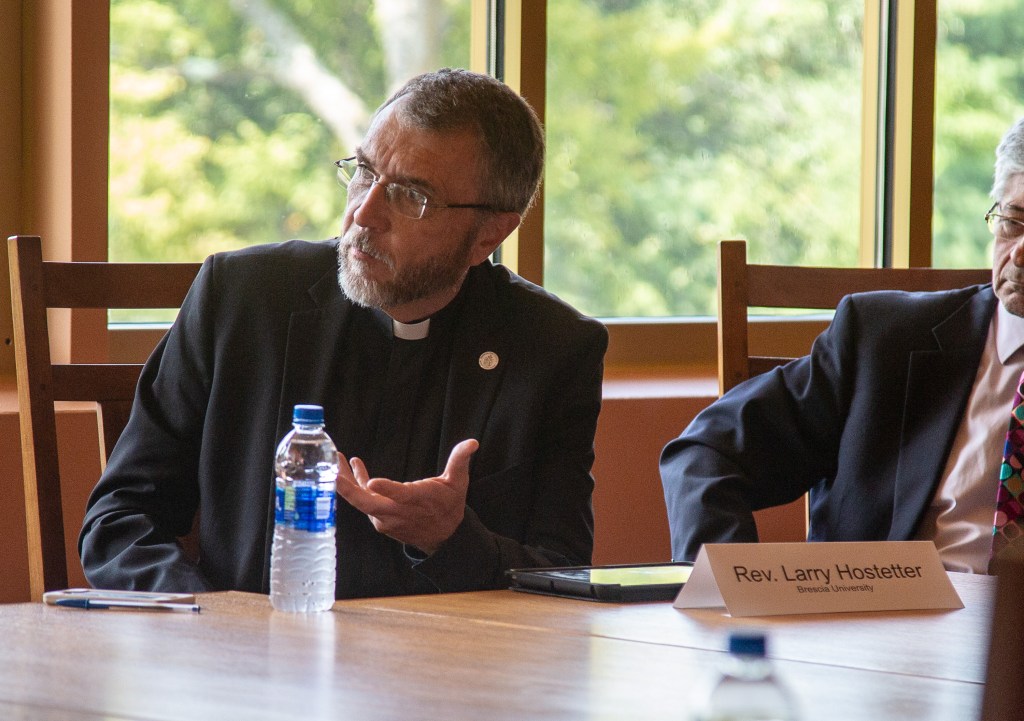 Earning a degree or a certification can have immense financial benefits for someone seeking employment. But what if there are obstacles outside of the higher education world that prevent people from even pursuing that better financial future to begin with?

Reforms to the country’s social welfare benefits and immigration laws could lead to improved access to higher education and help solve workforce issues, according to the conversations.

According to one of the participants in the roundtable, he encounters many people who question the value of pursuing a GED and trying to find a job. He said people often say, “I can stay home and earn the equivalent of $14.34 an hour from entitlement programs. So we get that message from a single mom with two kids that they’re going to stay home.”

It wasn’t made clear during the roundtable where the $14.34 an hour figure came from.

In Kentucky, poor people can receive health insurance through Medicaid. Those who qualify for food stamps can receive around $500 a month for food for a family of three, according to the USDA. A poor family of three could also receive up to $262 a month for no more than five years through Temporary Assistance for Needy Families funding, according to the Cabinet for Health and Family Services. Some pregnant women, infants and young children may also qualify for some money on a monthly basis for healthy foods through the Women Infants and Children program.

Guthrie said he believes there are single mothers who have no choice under the current system but to stay home with their children and live on government benefits. The problem is if you get a job, the government benefits can disappear instantly, and many entry-level jobs pay less than the benefits were worth, he said.

“That’s what we have to fix. We have to not have a cliff at the end … because if you’re a single mom with two kids and one of them has asthma, and you’re on Medicaid, you’re going to be better off if you went to work — five years from now. But you’re not worried about five years, you’re worried about next month, and you can’t blame them,” Guthrie said. “The biggest tax in America is on people at the lower end. It’s an 80-percent tax if you go to work. Think about that. Because if you go to work, you lose the benefits you had. … That’s just not fair — you’ve got to step it off.”

Guthrie noted even if someone lands a job that comes with health benefits, they may wind up with copays and deductibles that are more expensive than if they remained on Medicaid.

Guthrie, a Republican, said reforming government benefits to fix the “cliff” is something he is attempting to work on with Democrats, who currently control the U.S. House.

“That’s one thing that’s on our — we’d love to see if we could pull it off together. I talk to some of my friends on the other side … sometimes (perfect is the enemy of the good),” he said. “People are fighting the good fight for it. And you’ve got to keep planting the seed.”

“I’ll step into this,” said Rev. Larry Hostetter with Brescia University, a Catholic university in Owensboro. “If we could fix the immigration system for some of our students who are very talented and bright, are leaders for today and tomorrow, will be industry leaders, but because of their immigration status have no access to aid — if we could fix that, I think we would see some of the workforce problems alleviated.”

DACA stands for Deferred Action for Childhood Arrivals. It is “an immigration option for undocumented immigrants who came to the United States before the age of 16,” according to the Immigrant Legal Resource Center. “Although DACA does not provide a pathway to lawful permanent residence, it does provide temporary protection from deportation, work authorization, and the ability to apply for a social security number.”

Guthrie said President Donald Trump has said he will sign a bill concerning DACA if Congress can get one to his desk. He reiterated his concern that “we can’t let perfect be the enemy of the good” when it comes to solving immigration issues.

“Hope springs eternally,” he said. “Hopefully there’s another chance after this session.”

Hostetter said “a lot of talent” hangs in the balance based on what Congress decides to do.