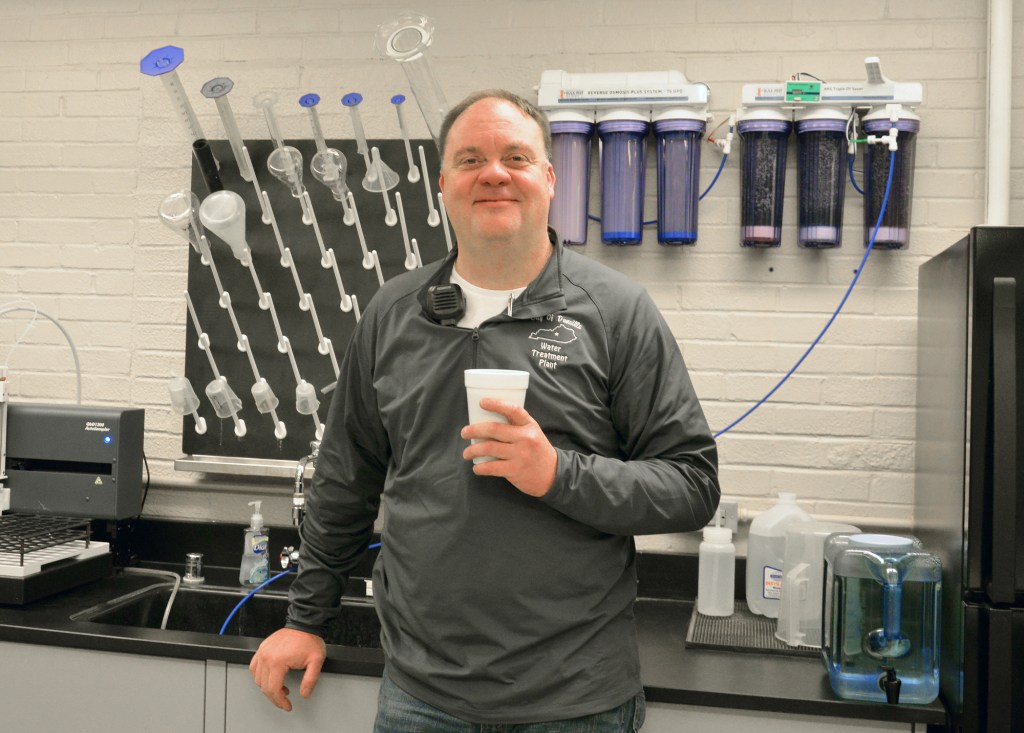 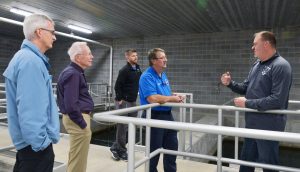 On a typical day, Tompkins drives from his home in Science Hill and about 7 a.m., opens a large gate in the black metal fence that surrounds the water treatment plant on Lexington Avenue and pulls into his parking space.

The first thing he does is make a large pot of coffee. Then with a large Styrofoam cup of hot coffee in hand, he walks through the building and checks on the operations.

“I just drink my coffee and walk around and look,” he said. 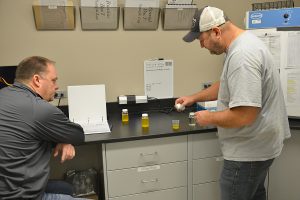 His first stop is in the chemical building. He studies the large computer screen to make sure chemicals are feeding into the water supply correctly. And he listens to the echoes of large motors humming as the plant processes about 12 million gallons of water a day.

“I listen for the big motors vibrating really bad,” which would indicate “discharge pressure going into the system. It’s suppose to be constant, not lower or higher,” he explained.

Then, Tompkins strolls through the laboratories and looks over the second and third shift operators’ notes, calculations and water testing data. If they have an issue or problem, he tries to address it. 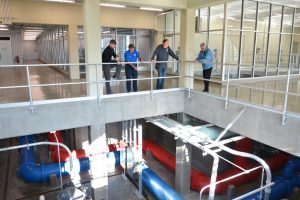 After that, he goes back to the GAC lab  — which stands for Granular Activated Carbon — and collects water samples from the filters and runs the tests. “Total organic carbon is what we’re looking for.”

“It’s a thankless job, but having said that, there’s 85,000 people that depend on you to run those tests every even hour,” Tompkins said.

Inside the expansive building, with cinder block walls painted white and gray concrete floors, raw water from Herrington Lake flows into the plant and a long, complicated series of chemical treatments and filtrations take place.

Tompkins’ office window overlooks the outside water holding tanks, where residuals (solid particles) are filtered out before the water is treated inside.

He walks down to the break room and grabs another cup of coffee, and explains how important constant water testing is and the precise timing that the seven operators have to conduct their testing. 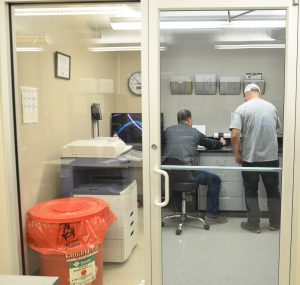 Inside the operator’s station, large computer monitors line the walls and show color diagrams of every operation automatically taking place. Other monitors show live shots from video surveillance cameras that are placed in every room, hallway and the outside perimeters.

In the corner of the room is a mop and bucket. He says someone once told him that the two cleanest buildings in town should be the hospital and the water plant.

Three days a week, two operators work each shift. While one runs tests, the other cleans and does maintenance work, he says.

The job is “pretty laid back.”

The hardest part of his job is keeping up with the ever-changing EPA regulations.

They’re changing all the time,” he said. “It becomes a lot of reading. Like the lead and copper rule — they completely changed it.”

Tompkins said he’s always learning on the job. And in February, he’s taking a microbiology class at Centre College. “It’s two days of lecture and two days of lab,” for an entire semester. He said he’s doing it to help keep up with the latest technology and trends. 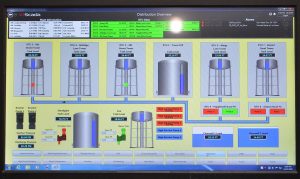 Tompkins said he doesn’t really feel the weight of responsibility of producing good, clean water for this region’s customers.

“It’s not a babysitting program,” he said.

Seven of the eight operators have their Class 4 licenses, which is the highest level you can get, he said. The eighth guy just earned his Class 1 license and it will be another four years before he reaches Class 4 level, Tompkins explained.

Tompkins adds, though, because of his years of experience, he can offer direction or advise if something in the plant gets out of balance.

“The water plant is boring, but that’s by design,” Tompkins says. “That’s what we want — monotonous and boring. … You don’t want, in the water plant, stuff going on every day.”

Then he adds, “I like the idea of doing an important job that people don’t think about.”