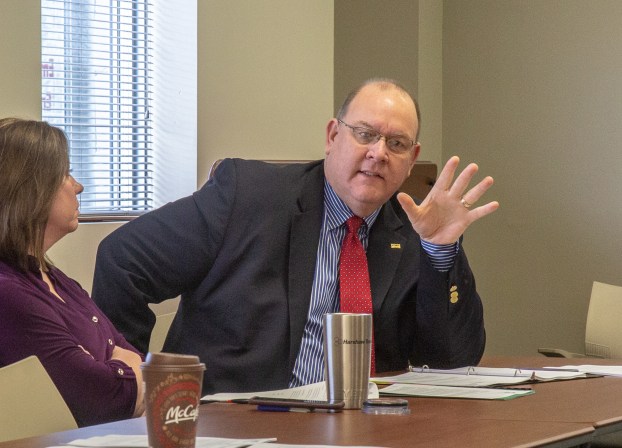 Milliron said Thursday morning he had issued the executive order — his first since the city declared a state of emergency over the COVID-19 pandemic — on Tuesday. Additionally, Milliron said any expense over $500 must have a purchase order and he must personally approve paying it.

The measure is a “precaution” to shore up the city’s general fund in advance of what could be significant revenue losses due to COVID-19, Milliron said.

Some of the expenses that have already been rejected include a new freezer for the fire department and new workout equipment for the police department.

“Anything that is discretionary spending, even though the money is in the budget … if it is not a necessary purchase at this time, it is considered discretionary,” Milliron said.

The city will continue to pay to “keep the lights on … and vehicles moving,” he said. But “anything over and above that, the staff and the management team is being to look at it as, ‘Do I need to make this purchase? And if I don’t, then don’t.”

The executive order states the spending restrictions are “necessary due to the coronavirus pandemic and the fact our budget is based in part on taxes and revenues that may not materialize because of the closure of industrial plants, businesses and other operations.”

“Your job is safe here at the city and together we will continue to work with our partners at the state and federal level to get past this unprecedented pandemic,” Milliron’s order states. “But in the interim, we need to tighten our belts to make sure we have available resources not knowing how long this pandemic will last.”

Milliron said he does not have an estimate at this point for how much spending could be stopped or delayed by his order. The city also can’t predict how badly the viral pandemic could impact its bottom line.

For example, city water employees are turning on service to people who have been shut off for nonpayment, and new disconnects have been suspended. Since the water department already operates at a loss each year, the additional expense of those changes will have to come out of the general fund.

“We are trying to be prudent and make sure that all spending that occurs is necessary spending,” he said. “For instance, we know that we had a pump go down and we don’t yet know how much this sludge sewer pump is going to cost us, but it manages some of our internal flow at the wastewater plant. And it broke overnight. So we have emergency spending for that and it gets approved.”

Milliron also said Thursday that there’s been “a lot of chatter on social media” and public misperceptions or misunderstandings about the city commission’s decision to increase the insurance premium tax from 8% to 10%.

The vote finalizing the increase came at the same special called meeting at which the city declared a state of emergency.

Milliron said there was a deadline to “have everything published for the state” that had to be met by Monday, meaning the city had to act so it could pursue increased pay for first responders.

“If we were going to address public safety salaries, this was our only opportunity,” he said.

Milliron also noted the increase represents “2 cents on the dollar” and the city is facing financial pressure down the road not only from the COVID-19 pandemic, but also from increasing pension payments mandated by the state.

The City of Danville is posting updates about its response during the COVID-19 pandemic at danvilleky.gov/covid19.