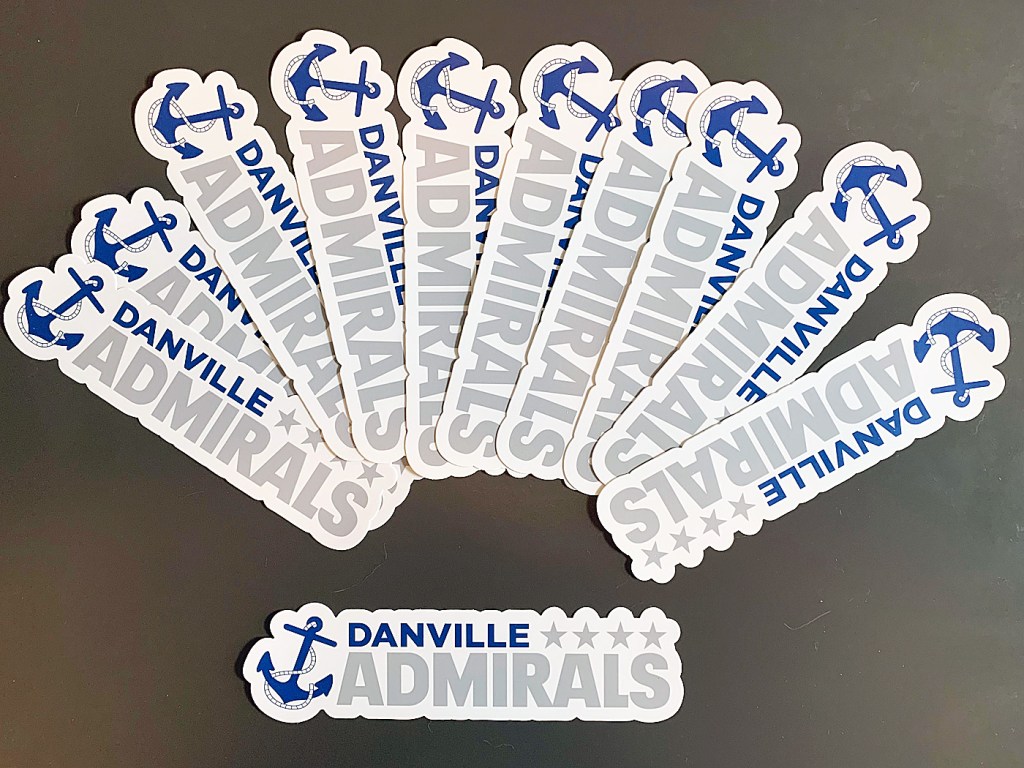 Bumpter stickers that will be given to every participant in the virtual Danville Admiral 5K which runs through the end of September. (Photo by Ben Saylor)

The second annual Danville Admiral 5K fundraising event is now up and running, virtually and literally.

The 5K is put on by the Danville Education Foundation and Alumni Association as a way to raise money for its annual teachers’ grant program, said board president Ben Saylor. Last year the 5K brought in about $5,000, he said and was used to fund several teachers’ educational projects for students in their classrooms. The grants are normally distributed in the spring, but because of the school closings in March, last year’s grants were rolled over into this school year. This fall semester, teachers will be once again submitting their grant applications for the coming spring semester, Saylor said.

Originally scheduled on Father’s Day weekend, the race was postponed because of COVID-19 restrictions, Saylor explained. So after researching how other organizations held 5Ks during the pandemic, the foundation chose to have a virtual 5K.

“We decided it was a good way to still hold a fundraiser,” and it allows supporters to participate, even if they don’t actually run, Saylor said.

But he has already paid his registration fee and has listed his time as N/A on the leaderboard which is now live online.

People registering for the virtual Admiral 5K — $25 for adults and $15 for children — will receive a Danville Admiral bumper sticker.

“We’ll let anyone run,” Saylor said laughing, even if they aren’t in the Danville school district.

If registering more than one child, you can get one free with promo code: ExtraChild at checkout.

When they’re ready to start the 5K runners need to use their cell phone’s step counter (or any other activity tracker) to keep track of the distance (remember a 5K is 3.10686 miles); take and save a screenshot (or photo) of the distance when finished.
Use the cell phone’s stopwatch or an “old fashion” stop watch to keep track of the time running, then take and save a screenshot of it when you are done.
Then go to giveDanville.org/admiral5k-time and enter in your run details.
Check the leaderboard at any time to see how you stand up against the competition. And if you want to improve your time, you may register again and run again.

People who want to give to the foundation but not run may add their names to the board as well.

Saylor said this virtual 5K format, “Is easier and safer for runners who would normally gather for a race.”

In addition to the 5K, the foundation is also selling Danville Admiral neck gaiters as facemasks, Saylor said. “Runners like to wear these,” he said. Hopefully soon, the foundation will also be selling Admiral face masks too.