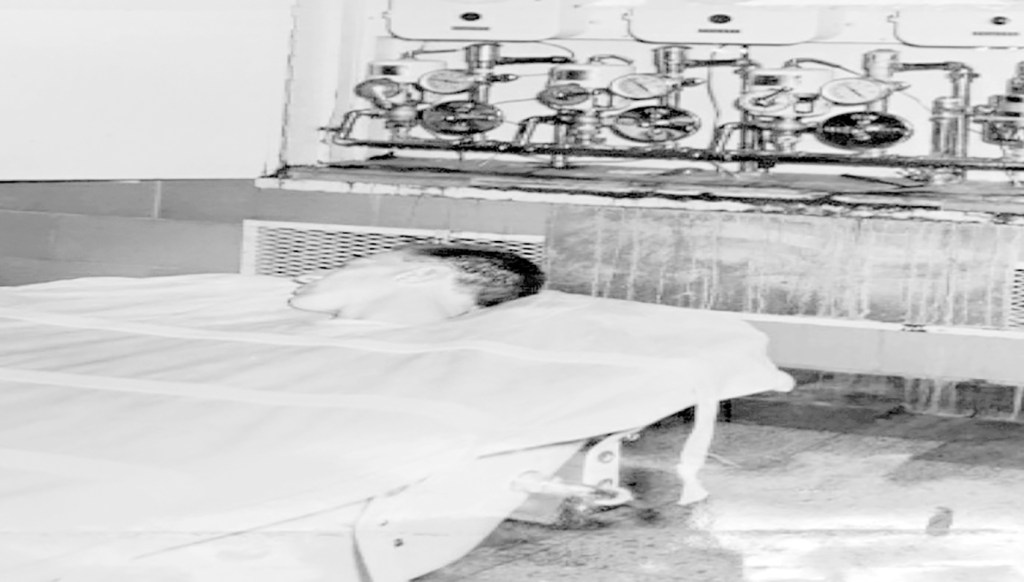 This photo shows a patient at the hospital being treated with hydrotherapy where he was in the tub with either freezing ice water or near scalding water with a cover over the tub to prevent escape. The idea was to affect behavior to what it was determined to be correct. Photo submitted

“Darnell: The Story of a Kentucky Mental Asylum” is the newest historical non-fiction book by local columnist and author Jack Godbey. The seven-story structure has been vacant since 1977 and is located on Northpoint Training Center’s prison campus.

“My goal in writing this book was not just to tell when it was built and when it closed,” Godbey said. “I wanted to capture what life was like at the hospital on a day-to-day basis.”

He said he interviewed many people who shared their stories about their relatives who worked at Darnell, and others who were patients there.

Godbey said he found that, “The hospital was a huge part of the local community during its day. I was surprised to learn about the medical treatments that were applied there during that time.”

He said his research showed that the hospital and its staff was very respected “and was always on the cutting edge of treatment for mental illness for the time period.” Some of the treatments included electric shock, insulin shock and hydrotherapy “where a patient was placed in a tub of either freezing or very hot water in order to calm the violent patient, or stimulate someone with schizophrenia.” 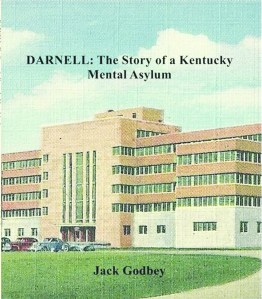 One of the most surprising treatments used at Darnell “was the use of the lobotomy where an ice pick was placed through the eye socket into the brain in order to change the behavior of the patient who may have demonstrated undesirable behavior in the past. Although this sounds horrible in today’s time, we have to remember that at the time of application, these were accepted and cutting edge treatments for the mentally ill.”

Many of the patients had severe mental illnesses and were violent, Godbey said. “Many people are surprised to learn that the hospital also held many people who were not mentally ill at all. Patients could be held there simply because they had grown old and the family no longer wanted them. Many young girls who became pregnant outside of wedlock were signed into the hospital by their families to prevent the shame of the pregnancy that was present at the time.”

The courts also sentenced alcoholics and drug addicts to stay at Darnell. Godbey added, “Sadly, many homosexuals were housed in the hospital as well, based strictly on their sexuality and treatment was given to tray and ‘fix them.’”

Godbey is very familiar with Northpoint Training Center since he worked there for 20 years before retiring on Dec. 1. He said, “As I was writing by book on Northpoint, I had spent countless hours at the library in Frankfort searching through old documents and newspaper clippings and I realized that the hospital was not just a side not in the history of the prison, but it had a story all its own to tell. Once I began researching the history of the hospital, it began to speak to me and I entered a great love affair with the building and the people who worked there and those patients who were housed there.”

There is an old scrapbook that’s inside the Darnell building where someone once saved photos, newspaper clippings and other articles, Godbey said. “The articles and pictures that I uncovered painted a very real story. Patient on patient violence, patient escapes and drownings were all documented.”

And the hospital celebrated many great accomplishments over the years. “Community dances were held for patients and citizens to interact and spend time together. “Government politics played a role and often led to a change in leadership for the hospital, and the book covers all the events, both good and bad.”

Most of Godbey’s research was conducted at the Department of Library and Archives in Frankfort. But, “While it was difficult to find many people who actually worked at the hospital, I was honored to speak to many people on the phone and through social media who had a family member there and who shared stories they had heard and described scenes that they saw when the visited the hospital,” Godbey said.

Through his research, Godbey was able to read the entire patient list who was ever at the hospital and what they died of. “Although these were just names on a page, some of those patients seemed to jump out at me and insist their story be told.

“One was a patient named Sally who was at the hospital due to having no family. … She kept to herself and liked to sit and watch the comings and goings of the daily grind at the hospital.

“Sally was beaten to death by another patient who was experiencing a schizophrenia episode,” Godbey said.

“Another patient who stood out to me was a man named Wilbur who was released from the hospital because he was deemed as being cured. He went back that afternoon and was an active shooter at the hospital. He clearly was not cured.

“Their stories as well as several others are covered in the book.”

Along with the patients’ stories, Godbey also recalls the hospital’s history, beginning in 1938 when construction was first planned. The building was constructed by the use of inmate labor on loan from the Kentucky State Reformatory. It was leased to the state to house German prisoners of war, and eventually served as a mental hospital for American soldiers returning from the war.

Godbey said he’s included lots of photos in his book that show life at the hospital back in its day, and how it looks now.

“I have always felt that the hospital walls were very vocal and always told their story to me as I walked through it. So much happened there, both good and bad, that the story was dying to be told, and I am honored to be able to be the one who tells it.

“Darnell: The Story of a Kentucky Mental Asylum” was published by Book Patch Publishing, and can be purchased at the online bookstore at thebp.site/253973 for $15. Copies are also located at Kentucky Soaps and Such in Stanford.

Godbey also welcomes people to contact him at wizardman66@live.com.