Looking Back at KSD: Munsell was school superintendent and cartographer 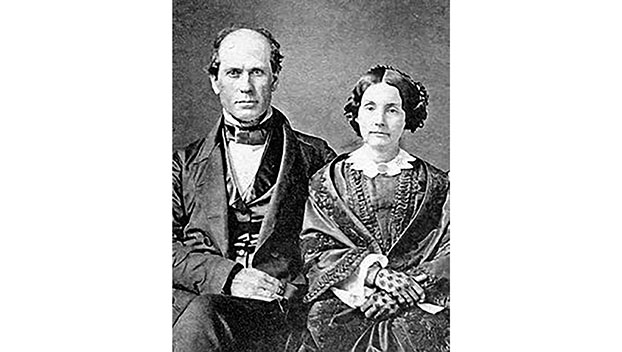 John Adamson Jacobs and his bride. Susan Walker Powell Jacobs, posed for a wedding photograph in September 1827. John Jacobs was 21 years old and Susan was 20. Jacobs had served as principal of the Kentucky school for one year before his marriage.

In the March 31, 1921, issue The Kentucky Standard reported that The Courier Journal had recently carried an article about the survey that determined the location of the boundary line between Kentucky and Tennessee. “Mention was made of Dr. Luke P. Munsell, who was connected with Kentucky School for the Deaf from 1833 to 1835.

In the early days of the school the boarding and educational departments were under different management. After the death of the institution’s first superintendent, Rev. John R. Kerr, and his wife from cholera in 1833, the Centre College Board of Trustees, which operated the School for the Deaf, appointed a Centre College professor, Dr. Munsell and his wife to fill the vacancies of superintendent and matron, respectively. Dr. Munsell was also appointed school physician.

The Standard editor, George McClure, wrote that, “Little is known here of Dr. Munsell’s life before or after his connection with the school.” But in fact, Munsell had established a reputation as a surveyor and cartographer well before he joined the Centre staff and, briefly, served as superintendent. In 1818 he was chosen by the Kentucky Legislature to survey the state line between Kentucky and Tennessee, from the Tennessee to the Mississippi Rivers. “

The legislature’s minutes show that the state loaned Munsell $6,000 “to facilitate the completion of his large and elegant map of Kentucky”, which would be the first large-scale map of the Commonwealth of Kentucky. 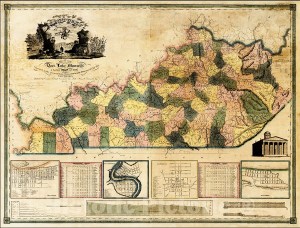 For four years, Luke Munsell labored to create the first large scale colored map of the Commonwealth of Kentucky. It was engraved by Hugh Anderson in Philadelphia, and published on December 16, 1818. The only surviving original 1818 maps are held by the Kentucky Historical Society, the University of Kentucky, the Library of Congress (3), the American Philosophical Society, and the University of Pittsburgh.

It was engraved by Hugh Anderson in Philadelphia and published on Dec. 16, 1818. Later, 147 copies of this map were bought by the state, and in 1824 200 more were purchased at $6 each. The map delineates the 68 counties then in existence in the Commonwealth. Surviving copies of this map are held by the Kentucky Historical Society, the University of Kentucky, the Library of Congress, the American Philosophical Society, and the University of Pittsburgh.

A boundary clarification between Kentucky and Tennessee and the creation of multiple new counties prompted Munsell to issue a revised and slightly smaller wall map in 1834, engraved and printed in Cincinnati.

Thus, by 1832, when he joined the Centre College faculty and took up his duties soon afterward as superintendent of the deaf school, Munsell had already been a successful druggist in Frankfort, had surveyed part of the southern border of the state and had completed a map of Kentucky, commissioned by the Kentucky legislature. His wife, Elizabeth Todd Sneed from Franklin, Kentucky, served as matron.

The Aug. 25, 1832, minutes of a Centre Board of Trustees meeting reported that “Luke Munsell was appointed Professor of Natural Philosophy and Chemistry, salary per annum $750.”

After the deaths of the Kerrs, he was appointed superintendent and school physician. At the same time Munsell taught chemistry, mineralogy, and natural philosophy until 1836. And three of his 10 children were born in Danville during his time there.

After Munsell severed ties with Centre, the college consolidated the management of boarding and instruction at KSD into one position and John Adamson Jacobs, the school’s first successful teacher, became superintendent, as well as principal and teacher. Jacobs served the school until his death in 1869.

Munsell’s anti-slavery position was the likely impetus for his family’s move to Indianapolis in 1835 or early 1836. He was obviously established there in 1836 when he registered a copyright for a map of that city.

In Indianapolis, Munsell served from time to time as town surveyor between 1839 and 1844, worked as a civil engineer, advertised his services as a physician, was a founding member of the Indianapolis Second Presbyterian Church, and was local agent for the American Land Agency.

In 1852, the family moved to Jeffersonville in southern Indiana. In 1854, Munsell died in Jeffersonville at the age of 64 “of heart disease after seven months of severe suffering,” according to a Munsell family biography. Luke Munsell was interred in Frankfort Kentucky.