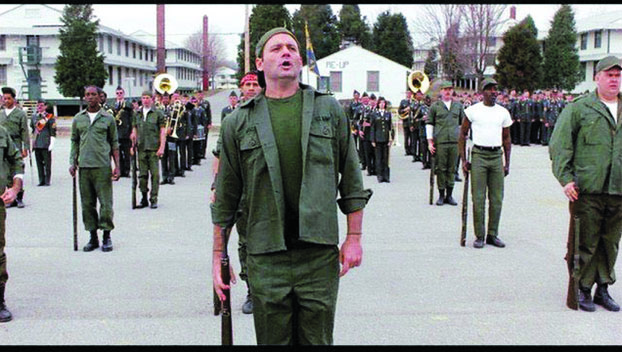 That’s a fact, Jack!” Actor Bill Murray’s character from the iconic movie Stripes tells the cadre that he and his Soldiers are ready to drill to qualify for graduation. The movie was filmed almost exclusively at Fort Knox and nearby Louisville. (Photo courtesy of Columbia Pictures)

“We’re about to celebrate our 50th anniversary as best friends,” said Reitman, the movie’s director. “Actually, we may have just done it. I guess it’s time for a celebration.”

Just over 40 years ago, Reitman and Dan Goldberg conjured up the idea for Stripes — about two best friends joining the Army together. Both producers wanted to make the movie somewhat realistic, so they sought approval from U.S. Army leaders to film on location at an Army post.

By the end of the 1970s, the nation, particularly Baby Boomers, had grown weary of protesting the Vietnam War. Americans in general were eager to focus on growth and prosperity, so they turned to Hollywood and other forms of entertainment for something different, something new, something entertaining — a shared laugh or two.

By then Reitman and Goldberg were primed for the task of delivering laughs.

“It certainly was a great decade for both Dan and myself,” said Reitman. “It was a period when directors really had great opportunities, and we had just a really great group of people who made their formative and most important movies in that period.”

“Films were not quite as commercially formulaic as they became in the two decades or so following, but Hollywood still had a real presence in worldwide filmmaking,” he continued. “There was a real professional core to the movies that got created.”

The two had met 10 years prior while attending McMaster University Hamilton in Ontario, Canada. Reitman was in the honors music program, Goldberg was studying sociology.

“We started making movies together,” said Goldberg. “Through that, we became best friends.”

Goldberg said humor became an ideal vessel from which to usher in the ‘80s.

“Starting around the time of Animal House (1978), comedy took on a real anarchic tone that it hadn’t seen before – pushing against institutions or a common way of thinking; not being afraid of making fun of them,” said Goldberg. “The rest of the ‘80s kind of followed suit.”

Reitman said the shift in cultural thinking freed many movie producers to explore concepts they were unable to talk about before.

“We had the ability to both entertain and enjoy, “said Reitman, “and to be proud of our culture and ourselves at that particular time.”

The idea for Stripes surfaced in a bathroom one day while Reitman was attempting to shave.

“It was just before the premier of Meatballs in Toronto, Canada,” said Reitman. “I felt like it was time for another service comedy. We were in peaceful times, it was post-Vietnam, and I thought it would great to have some comedic look at the Army that would not be another protest movie. Those had been a staple of Hollywood.

“My idea was to have Cheech and Chong join the Army; that’s what Dan and Lenny [Blum] initially wrote.”

They were not able to get Cheech and Chong, but they had worked with Murray on Meatballs and were good friends with Harold Ramis.

“I knew they were really good together and had a really good chemistry,” said Reitman. “I thought they would make a better version of the movie than we had even conceived.”

Despite the premise of Stripes being a lighthearted attempt at poking a little fun at the military, Army leaders liked what Goldberg and Reitman presented, and they agreed to support the effort. Goldberg said he has no idea why but is glad they did.

“It made it really easy for us to get troops during filming,” said Goldberg. “It just took away any kind of negativity from the movie, and that support really made it a very enjoyable experience for everybody because we were really embraced by the Army.”

The Cold War-era movie follows two best friends— John Winger (Murray) and Russell Ziskey (Ramis) — who are tired of the mundane meaningless of their jobs and lives. They decide to join the Army for a bit of fun and adventure. The movie hones in on two major story lines: them getting through basic training, and then later accomplishing a major mission while stationed near Eastern Europe.

Reitman and Goldberg told Army leaders they needed an ideal location from which to film both major settings. Officials offered up three or four basic training environments from which to choose.

Goldberg and Reitman settled on Fort Knox. Their reasons included the nearby availability of Louisville for city scenes and some forested areas at the post that would become the road leading to Czechoslovakia in the movie.

“I loved shooting at the fort, and Louisville was a real attractive town to be living in,” Reitman said. He said he was able to bring his wife and family down during the shooting, and enjoy life in the city each evening. Louisville also became the setting for the opening scenes that lead John Winger to the Army.

One of the first scenes shot at Fort Knox involved basic trainees running around and a flurry of activity that made the post look very busy. Reitman said the Army was very accommodating to this and all of their requests.

“That’s one of the great things about the Army is they’re pretty good at delivering things that you need at a particular moment, and they’re very good on the schedule,” said Reitman. “The film feels effective because we clearly shot a base that was active with Soldiers and all the hardware that is around right there.

Goldberg said besides launching the careers of many actors that were unknown at the time, Stripes also gave actual Soldiers an opportunity to act, which added to the movie’s authenticity.

“We were just surrounded by the Army all the time,” said Goldberg, “so it didn’t feel phony.”

One of the most iconic scenes from the movie, which adds to its current popularity — including being considered the top military movie of all time on one website as well as among the top 100 notable movie quotes by fans — happened during graduation. Winger’s squad has overslept after having trained all night, and just when the cadre leaders are about to declare them basic training failures, they suddenly march in and perform a drill that has Winger declaring the classic line: “That’s a fact, Jack!” when asked if they were ready.

Reitman said there was a lot right that happened that day.

“We had all these various real platoons brought in who did all the parade marches. We had our own group of actors, many of whom were also Soldiers that we recruited right from the base, and they all did very well,” said Reitman. “It was these actual sergeants who organized the platoons and moved them around the field which led to some of those memorable moments in comedy.”

The drill scene went so well, they captured it in one take.

Another unique aspect of the movie, the inventor of the Steadicam, Garrett Brown, also happened to be their lead cameraman for graduation scenes and used his new invention to give the ceremony its iconic look. Stripes was only the second movie to take advantage the Steadicam, according to Goldberg, the first being Rocky.

With roughly $10 million to spend, Reitman and Goldberg said they were able to capitalize on the kindness and cooperation of Fort Knox leaders and the ideal settings nearby to stay within budget during their 38-day shoot.

What resulted grew to be tremendously prosperous for many, including the two producers. Ghostbusters, Twins, Old School, Junior, and several more movies have entertained audiences over the years. The movie helped launch the successful careers of actors John Larroquette, John Diehl, Conrad Dunn, Bill Paxton, Sean Young, and Judge Reinhold. And Reitman and Goldberg have collaborated on several projects through the years since.

Both men said they don’t know why Stripes stays on the minds of moviegoers year after year. They do know, however, that it came about from a desire to honor Soldiers at a time when it was needed.

“It was finally time for that — to look toward our country and the people who were defending it,” said Reitman. “It seemed like the right tone to hit.”

Much of the landscape that audiences see in the film is gone today. Barracks, the parade field, tanks. But the memories and respect for Soldiers and Fort Knox remains strong. As does the friendship of two Canadian filmmakers.

“We were surrounded by the Army, and when we would talk to the captains, the colonels and the majors, they’re really impressive people; really dedicated,” said Goldberg. “That helped shape our attitudes about the movie. And it has become the movie that people 10, 20, 30 years later continue to bring up to me.

“You can’t plan for that; it’s just wonderful.”