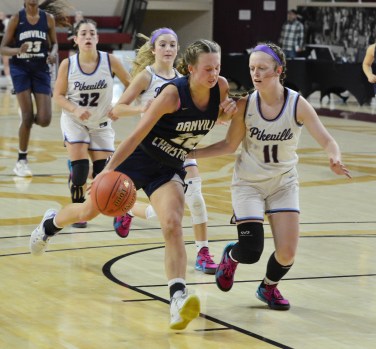 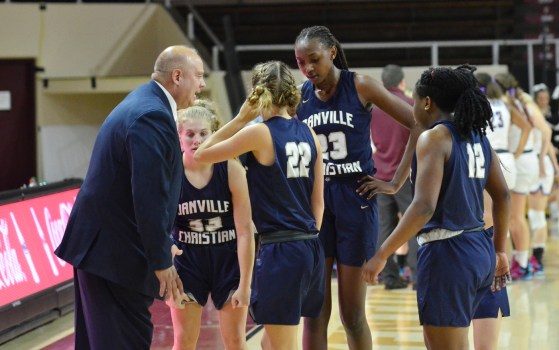 Danville Christian coach Billy Inmon talks to his players during a timeout in the fourth quarter Wednesday. - Photo by Mike Marsee 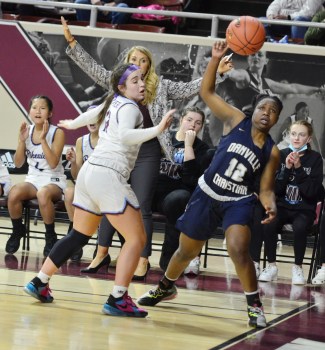 Esther Kwagala (12) of Danville Christian tries to regain control of the ball after it was deflected by Pikeville’s Kristen Whited during the second quarter Wednesday. - Photo by Mike Marsee 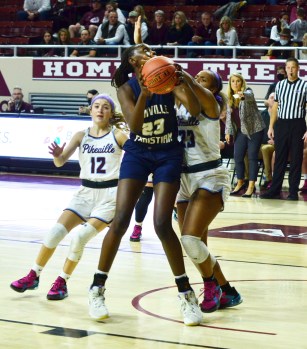 Grace Mbugua (23) of Danville Christian is double-teamed by Pikeville’s Kristen Whited (12) and Leighan Jackson as she looks to the basket during the second quarter Wednesday. - Photo by Mike Marsee 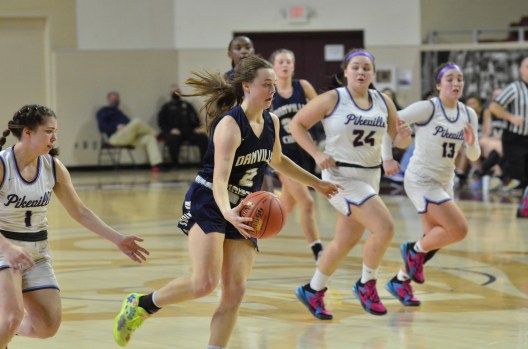 Maggie Bentley (2) of Danville Christian leads a fast break after getting a steal during the second quarter Wednesday. - Photo by Mike Marsee 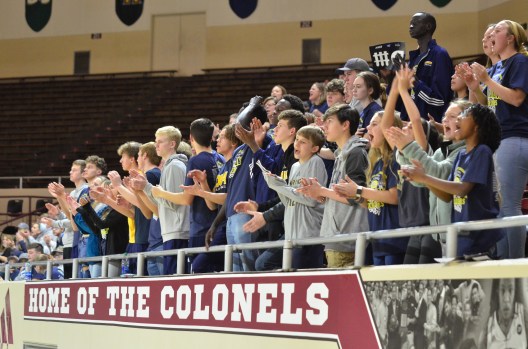 Danville Christian students cheer on the Lady Warriors on Wednesday during their debut in the All “A” Classic. - Photo by Mike Marsee 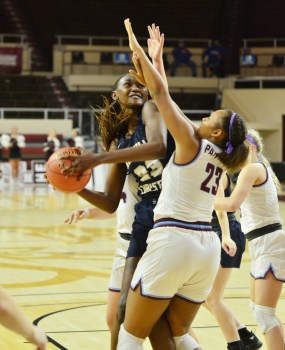 Grace Mbugua, left, of Danville Christian is covered by Pikeville’s Leighan Jackson as she looks to the basket during the third quarter Wednesday. - Photo by Mike Marsee 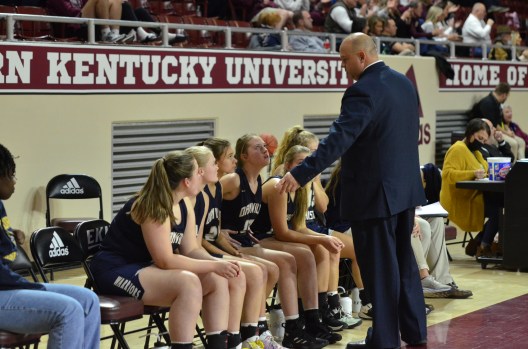 Danville Christian coach Billy Inmon talks to players on the bench during the fourth quarter Wednesday. - Photo by Mike Marsee 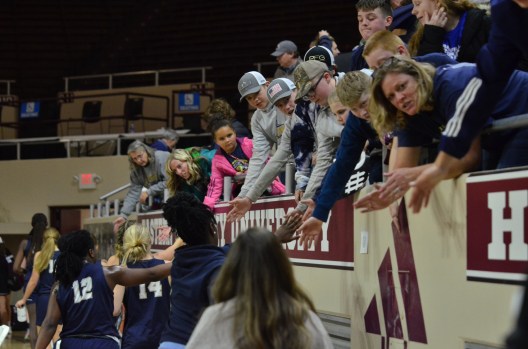 Danville Christian players high-five fans in their cheering section Wednesday following their game in the All “A” Classic. - Photo by Mike Marsee

RICHMOND — The Danville Christian girls’ first visit to the All ‘A’ Classic was something of a basketball field trip.

The Lady Warriors got to enjoy some time together outside of their normal basketball routine, to study their subject at a high level, to motivate themselves to improve their skills and, perhaps most importantly, to learn from their shared experience.

It wasn’t all fun and games, as the Lady Warriors found themselves outmuscled and overmatched in a 63-32 loss to Pikeville in a first-round game Wednesday night. But it was an invaluable experience for a team and a program that has come a long way in a short time and has designs on going much farther.

“It’s been an amazing thing, and I want to make sure that they build on this, that they don’t let what happened tonight stymie the energy and the momentum that we’ve got,” DCA coach Billy Inmon said.

What happened on the court at McBrayer Arena wasn’t pretty. DCA (15-4) turned the ball over 10 times in the first quarter and 24 times in all and got off only half as many shots as Pikeville (18-1).

The Lady Warriors managed only two points in the first seven minutes and trailed 18-4 early in the second quarter. They were never in the game after that, though they did play the Lady Panthers, who have the highest RPI rating in the All “A” field, on even terms for about a quarter.

In the big picture, however, this was another line on the growth chart that represents how far DCA has come in four years as a KHSAA member.

One of the smallest schools in the state to field a girls basketball team, DCA made its debut in the statewide small-school tournament in their third year of participation.

“The whole thing’s been a blessing,” senior Maggie Bentley said. “It was just a great opportunity. We were blessed to come out here and represent our school for the first time.”

When the Lady Warriors took the floor, they were greeted by most of the student body, which fronted the school’s energetic cheering section.

“That’s the biggest blessing we could ask for, that everyone has been so supportive of us and come out to watch us play tonight. It gives us that extra boost that we needed,” Bentley said.

Grace Mbugua, the 6-4 DCA center who was 10 inches taller than any Pikeville starter, won the opening tip without leaving the floor, but she didn’t see the ball much after that. The freshman, who averages 15 shot attempts per game, got off only three shots in the first half and nine in all.

Mbugua was the focal point of a physical Pikeville defense that prevented entry passes to her and pestered the Lady Warriors into one turnover after another.

“We were trying to establish an inside game, and quite frankly they just pushed us right out of there, so we ended up having a lot more turnovers than we normally would, and a lot less possessions,” Inmon said. “We tried to prepare them for their physicality, but in the end they just weren’t really ready for it. They really were ultra-physical, and we just didn’t come out and match that.”

Inmon said getting stronger is a priority for his team — a weight program has only recently been established — and he said this game is a perfect illustration of why that is so important.

DCA trailed 30-11 late in the first half but outscored Pikeville 16-14 over a span of about eight minutes and was still within 44-27 with 1:11 left in the third quarter.

Mbugua, who led the Lady Warriors with 13 points and 12 rebounds, scored nine points and Victoria Inmon, who had 11 points, scored seven points during that stretch.

The Lady Warriors were showing signs of fatigue by then, however, and they were outscored 19-5 over the final nine minutes.

When the game ended, the tired players took the time to high-five students and other fans in the front row of their cheering section on their way to the locker room.

Bentley, who scored five points, said getting to the All “A” was another milestone for a program that had won championships at lower levels before joining the KHSAA in 2018, playing in the All “A” and the 45th District Tournament for the first time in the 2019-20 season and beating district opponents for the first time last season.

“It will show that no matter how small our school is, if we’re hard-working and determined, we can still make it here to play with some of the bigger schools,” she said.

Inmon said the school has been buzzing for the nearly two weeks since both the DCA girls and boys teams qualified for the All “A.” There was a sendoff at the school Wednesday, as well as a police escort for the teams as they left town.

“There’s been just an energy around the school, with the alumni, with the staff,” he said. “It’s something that they’re always going to remember. Hopefully they’ll just remember the lessons learned from today and forget the game.”

PIKEVILLE 63
DANVILLE CHRISTIAN 32
Girls All ‘A’ Classic
First Round, At McBrayer Arena, Richmond