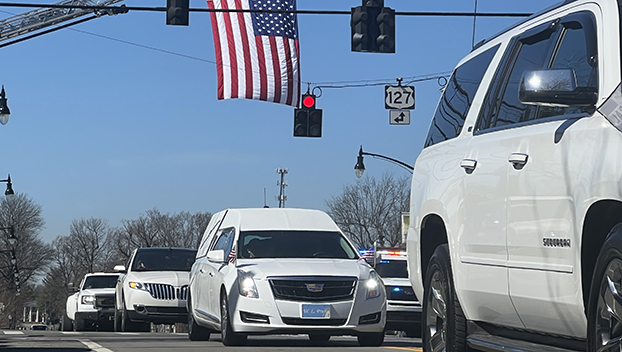 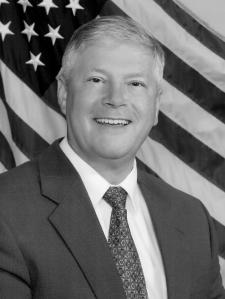 Former Mayor of Danville Bernie Hunstad passed away at age 70 on Feb. 25. Citizens gathered for his funeral and procession on March 2.

Hunstad spent much of his life serving his country in the military. A retired Colonel, he completed 30 years of commissioned service, 23 of which were active duty.

He served as Inspector General and as Military Advisor to NATO. He received the Legion of Merit award, among other military awards.

Hunstad was a native of Danville, and although he worked away from the town much of his life, he came back after retiring from the military. He was elected mayor in 2010 and served four years in the position.

Former commissioner Norma Gail Louis served on the city commission with Hunstad, but she knew him long before that, when they attended school together in Danville.

“Bernie’s character was impeccable, he was probably one of the most honest men I ever knew,” Louis said. “He was a devoted Christian, he loved his family, and was proud of his career in the military.”

Louis said during his mayorship, Hunstad was adamant about moving the city into the computer age. He was concerned with Danville’s infrastructure, and worked on getting utilities buried downtown and making better streets. Louis said the city’s infrastructure is still a major focus area.

Current Mayor Mike Perros knew Hunstad from following commission meetings at the time, and through Hunstad’s wife Susan, with whom Perros grew up. Perros said Hunstad was concerned about Danville’s overall economic development, and spoke openly about it.

He said even though some of Hunstad’s ideas and sentiments about how to improve economic development were not appreciated at the time, that they turned out to be true.

“I firmly believe his perspective is now appreciated more than it was at the time,” Perros said.

Among other accomplishments as mayor, Hunstad started a $28.6 million water treatment plant, was involved in four significant sewer treatment projects, improved the access road to the Boyle County School complex, developed a city and county trail system, and worked with the state to relocate water lines.

Both Louis and Perros said Hunstad knew how to be a great leader, which likely came from his military career.

Hunstad also served Danville through historic preservation. In 2014, he bought the former Centenary United Methodist church on Third and Walnut streets where Methodism got its start in Danville in 1780. It was the first Methodist congregation west of the Allegheny mountains.

The building had fallen into disrepair after flooding in its basement in 2008, and the building had a leaking roof. The congregation moved to a different building, and listed it for sale. It sat vacant until Hunstad bought it and decided to fix it up.

“When he bought the church building on Third Street, you could see him up on a scaffold in a cherry picker putting a new copper roof on the steeple of that church,” Louis said.

After finishing work in 2015, the Hunstads received a historic preservation award by the Boyle Landmark Trust. They also received an award for the building at the annual Ida Lee Willis Memorial Foundation Historic Preservation awards at the governor’s mansion in Frankfort in 2016.

“I think very few people would have had the courage to do what he did there,” Perros said. “He stabilized it, got it into use, made the community aware of its importance, and further sold it and got it into stable hands.”

The building is now rented out for events and used by the Third Street Methodist congregation.

Hunstad also worked on a property on North Third Street that was the old Durham Insurance building. He renovated it to its original state, and it now has retail space on the first floor, and an apartment on the second floor.

“Bernie was a contributor in every way,” Louis said. “He never asked anybody to do anything he wouldn’t do himself, and he was the first one to jump in and roll up his shirt sleeves.”

Louis said all of the work Hunstad and the commission did for Danville was to make the city a better place to live.

“After 30 years of service to his country, Bernie chose to come back to Danville and continue his service to the community he obviously cared deeply about, and those will be the things I will remember Bernie for doing,” Perros said.