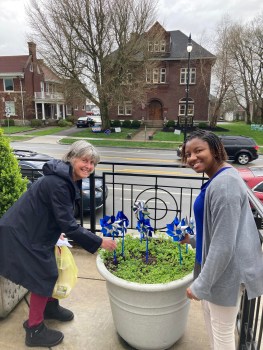 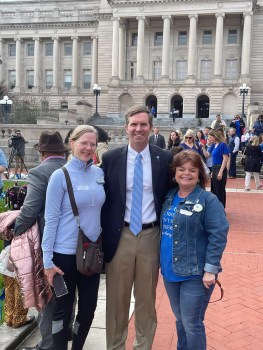 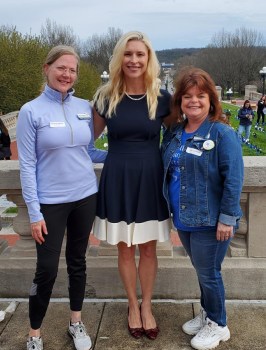 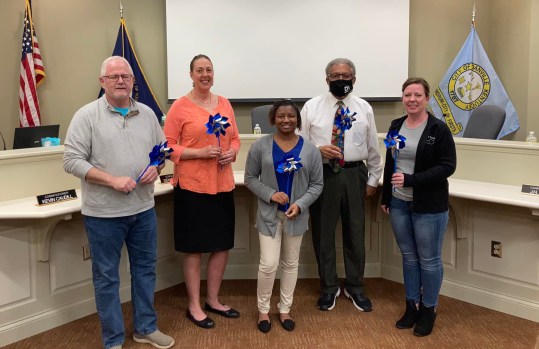 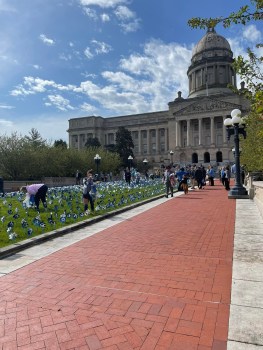 The “Paint the Town Blue” campaign is an initiative that seeks to bring prevention and awareness of child abuse to the forefront. By making a positive difference in the community, CASA and volunteers can help lead the way and become one step closer to eradicating this kind of exploitation. To give recognition to an unfathomable truth, CASA of the Bluegrass and local businesses are painting the town blue (Anderson, Boyle, Franklin, and Mercer County). Through the simple act of wearing blue, the community can work in tandem to bring awareness as well.

On Monday April 11, CASA Program Development Coordinator, Jody Spaulding and Volunteer Coordinator Colleen Gehlbach participated at the Capital (Frankfort) for Child Abuse Prevention. The Children’s Advocacy Center of the Bluegrass, Prevent Child Abuse Kentucky and CASA of the Bluegrass partnered with other local organizations to plant around 1,000 blue pinwheels in honor of child victims and the prevention of maltreatment.

The blue pinwheel has become a national symbol for preventing child abuse. In attendance, Governor Andy Beshear and his wife Britainy provided support and encouragement. Spaulding said, “Every child deserves a safe, healthy, nurturing environment to grow up in. What commitment will you make to prevent child abuse and neglect?”

Later that day in Danville, Volunteer and Community Engagement Coordinator Remonica Garr-Conner spoke before Danville’s City Commission meeting and planted pinwheels for prevention with Director Tami Wilson and Volunteer Coordinator Anne Kerbaugh. A portion of Garr-Conner’s speech was as follows…

“I speak before you today with similar verbiage as I did last year. As court appointed special advocates it is our mission to spread awareness of child abuse, dependency, and neglect. We walk with a child through the court system so that every child who has experienced abuse or neglect can be safe, have a permanent home, and the opportunity to thrive,” Gar-Conner said.

Kentucky was ranked first in the nation for child abuse for three straight years, according to the U.S. Department of Health and Human Services. This year’s reports, a little better, but just as cruel. Kentucky is ranked 5th in 2021. We are so appreciative to the City of Danville again for the acknowledgement that April is Child Abuse Awareness and Prevention month.

Gar-Connor continued, “At this very moment, CASA of the Bluegrass has 43 active cases with 76 children in Boyle and Mercer County. Including our other affiliate counties Anderson and Franklin, this number climbs to 73 cases with 138 children. The state of Kentucky as a whole has 17,809 children who have been victims of child abuse and neglect as of the current fiscal year (Administrative Office of the court records). Mind you, these are only the reported cases.”

Mosely said, “As we focus upon April as our nation’s observance of the National Child Abuse Month, I call to mind the late Nelson Mandela’s quote, “The true character of a society is how it treats its children.”  We all know that poverty, substance abuse and mental health problems are significant contributors to child abuse, and for this reason, the state of Kentucky tragically has held the lead in this area for a number of years.

Fortunately, CASA has played a key role in providing training to volunteers giving them the skills to provide strong child advocacy through the courts. CASA, along with the communities they serve, act as the eyes and ears and are able to respond quickly when indicators of child abuse are presented.

“As a community, it is up to the citizens of Mercer County to learn as much as we can about the signs, causes, and remedies for child abuse and neglect.  I encourage each of you to become familiar with what CASA provides and how you can become involved in providing protection and advocacy for the children of Mercer County.  Let’s work together to stamp out child abuse and neglect,” Gar-Connor said.

CASA’s Paint the Town Blue campaign is a visual reminder throughout the month of April that there is always a need for child advocacy and protection in our community and every community. Again, it is CASA’s goal to not only turn local businesses and communities blue, but the entire state of Kentucky in support of Child Abuse Prevention Month.

The month concludes with an annual fundraising celebration, CASA’s annual Derby Gala. The event is held at the Danville Country Club April 29th. Individual tickets are still available for $85. Go to casaofthebluegrass.org to purchase.

CASA of the Bluegrass will always need volunteers. Although CASA and its Court Appointed Special Advocates continue to serve children each year, the need for CASA volunteers continues to grow as more children enter the court system.

For additional information regarding donations, speaking engagements or volunteering, please contract Remonica Garr-Conner at CASA of the Bluegrass, 859.936.3510 or remonica@casaofthebluegrass.org