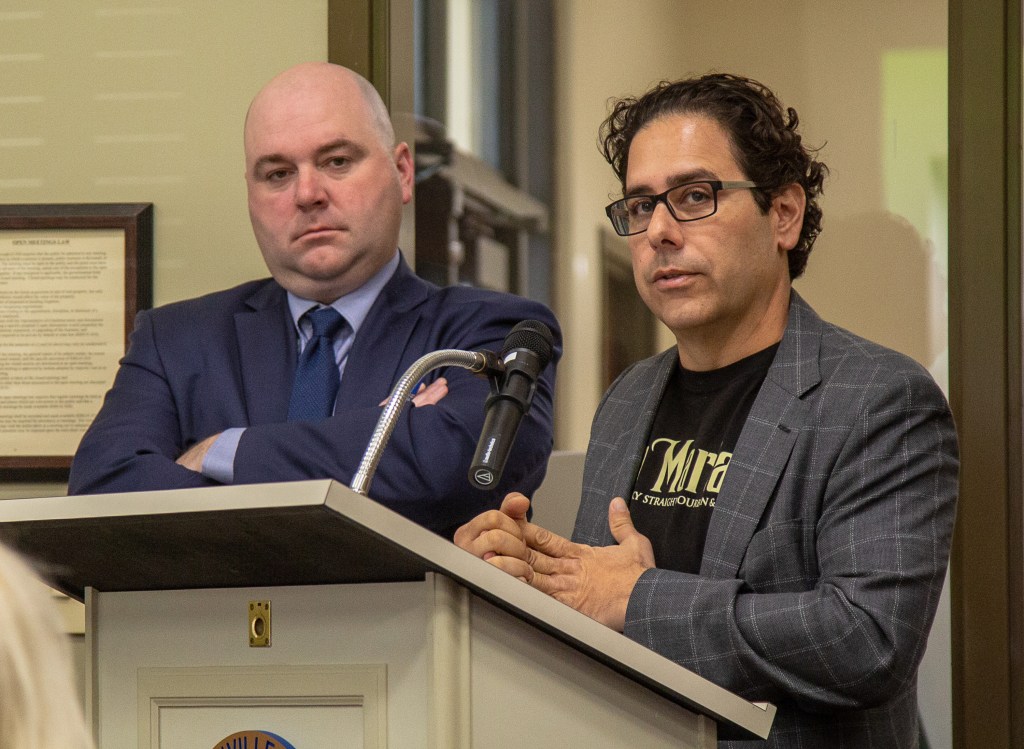 Francesco Viola, right, accompanied by his lead counsel, speaks about his distillery project before the P&Z Commission Wednesday. (Photo by Ben Kleppinger)

Danville’s planning and zoning commission has approved a future land-use map amendment that enables a large distillery project to move forward on the east side of town. 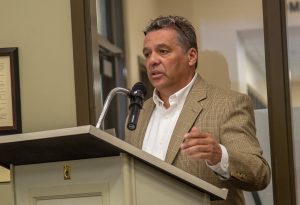 P&Z Director Steve Hunter presents an application for an amendment to the future land-use map to commissioners Wednesday morning. (Photo by Ben Kleppinger)

Commissioners voted unanimously in favor of the application from Francesco Viola, owner of the Luca Mariano bourbon brand, on Wednesday morning, after a well-attended public hearing.

Commissioners agreed with Viola’s argument that the distillery project would have an “overriding public benefit” and the planned use is compatible with the P&Z comprehensive plan. The FLUM designation was changed from low-density residential to “mixed-use employment.”

The FLUM amendment sets the stage for a zone change at a later date. P&Z Director Steve Hunter said the distillery will likely need to rezone most of the 272 acres touching Ky. 52, Old Lancaster Road, Letton Drive and East Main Street for industrial use. Currently, the properties in question are zoned mostly agricultural, with small pieces zoned for commercial and residential uses.

A conceptual plan for the distillery project includes an anticipated four-lane highway that Kentucky may build at some point between Ky. 52 and East Main Street.

Hunter said that road is a planned phase of an east-side bypass around Danville, which the state has on its list of future road projects. But it’s ranked so low right now it has yet to receive any funding. The initial design phase for the highway is expected to cost $33 million whenever it does move forward, Hunter said.

Jody Lassiter, president of the Danville-Boyle County Economic Development Partnership, told commissioners Viola included the highway on the conceptual plan only because it could be built in the future.

“Whether that road is ever built is immaterial to this project,” Lassiter said, then acknowledged, “It’s certainly going to benefit the distillery … if it ever happens.” 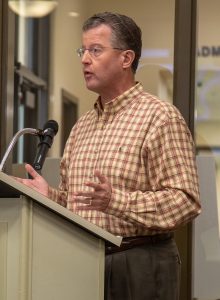 Jody Lassiter, president and CEO of the Danville-Boyle County Economic Development Partnership, explains the value he sees in the Luca Mariano distillery project for the community. (Photo by Ben Kleppinger)

Lassiter said Viola does not want to move forward with construction without anticipating the highway, then have to raze buildings and rebuild when the highway project does arrive.

Viola told commissioners the distillery plan would occur in phases, “over potentially my lifetime.” He assured multiple residents of East Main Street who spoke at the hearing that he intends to leave much of the farmland “as untouched as possible” and has no intention of developing land on the north side of the property, which abuts multiple residences in the area of East Main.

Viola also assured East Main residents he has no plans for any road intersecting East Main, other than anticipating the state’s plan. He told them his project would generate zero traffic on East Main.

Some also expressed concerns about traffic on Ky. 52. But Hunter said while the main entrance to the farmland right now is off of that highway, the planned entrance for the distillery operation would actually be on Letton Drive. The Ky. 52 entrance would not be used at all, he said.

Most of those who had concerns about the project also spoke favorably about its potential. One person, Donna Craiger, said she was opposed to the project entirely because there isn’t enough information available about “byproducts” created by distilleries, and because of traffic concerns.

“I don’t want it on (Ky.) 52 either, because if you all have been on that road, it’s like I-75,” she said. “… I’m opposed to it and I would like to see further investigation into it before you make a decision today.”

Viola said he anticipates beginning with a bottling facility and perhaps a few rickhouses for storing bourbon barrels. He also wants to continue to farm the land and raise livestock there. A distilling facility and visitors center would be future projects down the road.

Viola’s vision is to grow the grain used to make his bourbon on the land; feed the stillage waste leftover from the distilling process to livestock raised there; and “the livestock would then feed all of us.”

The historic William Crow House, said to be the oldest stone structure in Kentucky, sits on the property. Viola said he has stabilized the house, which had been falling down, and plans to begin restoring and renovating it once all the approvals are in place from P&Z so his project can move forward. Ultimately, the house could serve as the distillery’s visitors center.

Many of those who spoke at the public hearing were in favor of the plan, which they said would bring jobs and economic activity to the east side of Danville, while also fitting nicely with existing businesses and land uses. 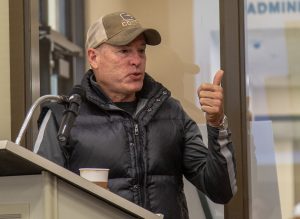 Robby Henson with Pioneer Playhouse gives Francesco Viola a thumbs up for answering a question about his distillery project during Wednesday’s public hearing. (Photo by Ben Kleppinger)

Robby Henson with Pioneer Playhouse said the project “sounds on the face of it just wonderful.” Pioneer Playhouse, an outdoor theater off of Stanford Road, is a neighbor to the distillery project on its back side.

“If there’s a distillery next door, I couldn’t imagine anything better,” Henson said.

But Henson said he hopes Viola’s development of the property will be done carefully. Another development across the road from Pioneer Playhouse may eventually look nice, but right now looks like a “strip mine,” Henson said.

Viola assured Henson he wouldn’t be conducting his development that way.

“Welcome to our neighborhood and it sounds like a beautiful plan,” Henson said.